Top comedienne Samantha “Gonyeti” Kureya of the Bustop TV fame yesterday said the men who abducted her from her home in Mufakose, Harare and assaulted her before abandoning her in Crowborough North Phase 4, warned her against mocking the government through her comedy skits. 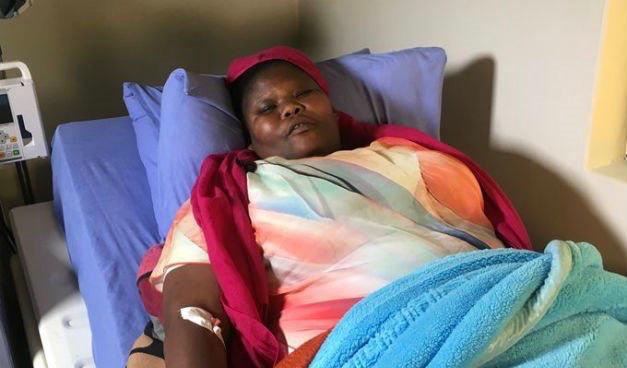 The bruised Gonyeti told NewsDay Life & Style from her hospital bed at a local health facility that the six men, who abducted and assaulted her with sjamboks after arriving at her home in an Isuzu twin cab truck and another car, said she was too young to mock the Zanu PF government.

The entertainer, who was dragged from home half-naked, said her abductors forced her to strip naked and roll in a sewerage pond before forcing her to drink the sewage.

“They were saying you are too young to mock the government through your skits as they assaulted me with sjamboks… I was made to roll from one end to another like what they do (during training). They assaulted

and later forced me to drink raw sewage. I had my phone, which they demanded and was broken. I was made to undress completely,” she said.

Bustop TV co-founder and producer Lucky Aaron said they will soldier on with their works as they were apolitical comedians.

“As the Bustop TV crew, behind the scenes we are all shaken and it scares us that some people would come and pick a comedian at home asking for content which is already in the public domain. Why would they get interested in our satirical content when we will be just reflecting on something that would have already happened?” he asked.

A police report was filed at Marimba Police Station under case number RRB4149688.

Gonyeti’s partner, Sharon “Maggie” Chideu, said they turned to comedy as a way of living as they could not find formal employment.

“If we are to stop this because of fear, what will we do as the youths when there are no jobs? We decided to create this Bustop TV as youths with the skill of telling the existing stories in the public domain through comedy,” she said.

Several other artistes who spoke on condition of anonymity yesterday condemned the attack, saying it was an attack on freedom of expression.

Savanna Trust and theatre director Daniel Maphosa said artists must be allowed to do their work.

“We never thought as a nation we would reach a level where creatives are regarded as a security threat. Freedom of artistic expression is enshrined in our Constitution as a fundamental right and artists must be

allowed to do their work. I hope the State will see reason in this and order for the halting of abductions and torturing of innocent artistes,” he said.

“I think it is unacceptable what they have done to Gonyeti. Comedy is not a crime. Satire is a right and Gonyeti is no criminal. We have a right to laugh at those in power and the government needs to accept that.”

National police spokesperson Assistant Commissioner Paul Nyathi said he would have to check the information first as he was tied up at the on-going Harare Agricultural Show. NewsDay