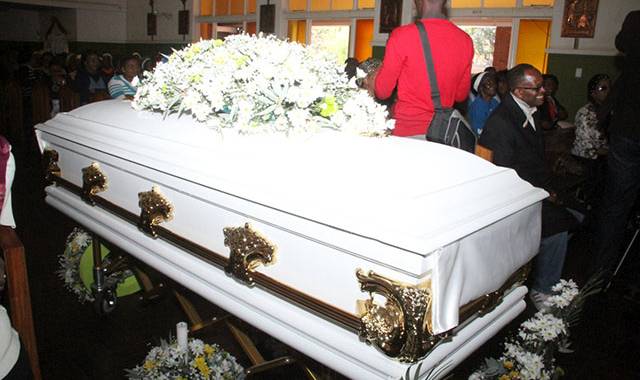 Veteran newscaster and broadcaster Godfrey Majonga who died on Monday, was laid to rest at Glen Forest Memorial Park in Harare yesterday.

Majonga is survived by his wife Grace and three children Caroline, Fungisai and Jeffrey.

Majonga who once served as chairperson of the Zimbabwe Media Commission, died due to a chest infection, his daughter and family spokesperson Caroline said.

’40 000 people buried on a hidden and illegal cemetery…

“He passed on at home on Monday at around 11pm. Our father has been ill and was in hospital.

“It all started with a cold and he was saying that he has flue. He was home for a week following the hospital detention at the Avenues Clinic for chest infections,” she said.

A requiem mass celebrated by Fr. Reki Mashayamombe and other priests was held at the Assumption of Our Lady Catholic Church Rhodesville Harare where mourners attended.

The funeral was attended by many people, some from Uganda and other countries who spoke on the achievements of Majonga.

A family representative who spoke H-Metro said that they have lost a father figure in the family.

“He was a humble man who united the family and everyone went to his house in Eastlea to get assistance.

“We can only thank God for the life we had with our father who has been a pillar of strength.

“He loved his family and all who were part of his life, she said.

“Inspired after the funeral of veteran broadcaster Godfrey Majonga. We in the media would do well to honour those who came before.

“Back in the day when black faces and voices were few behind and in front of the camera and the microphone,” she said.

Majonga’s death was announced by the Ministry of Information Publicity and Broadcasting Services who expressed their sadness over his passing.

We have learnt with sorrow and sadness the passing on of veteran broadcaster Mr Godfrey Majonga. Mr Majonga made immense contributions to the broadcasting industry as a broadcaster and later as the chairperson of the Zimbabwe Media Commission (ZMC). May his soul rest in eternal peace.

Fellow Cabinet Minister Kirsty Coventry said Majonga was at the forefront of helping people with disabilities achieve their dreams.

“I knew him as someone who always strived to make a difference for those who were excluded. Rest in Peace Sekuru, we will continue your work,” she said. H-Metro