Deported rapper, Kid Lyrik – real name Kudzai Mawunganidze – has revealed how drug dealing got him deported from the United States. 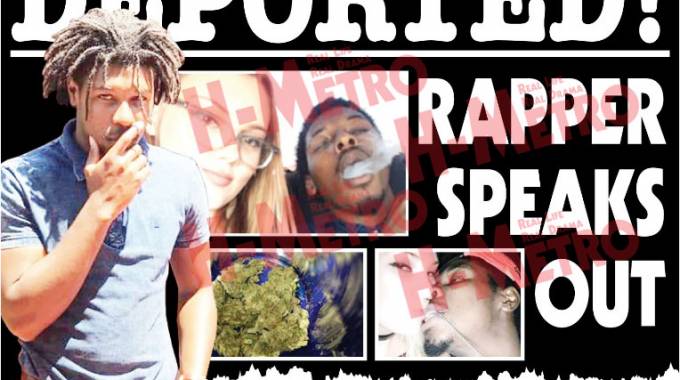 Kid Lyrik (27) who was in the US since the age of eight staying in Texas was deported last year in October after being arrested by undercover police during a cocaine drug deal.

He was also caught in possession of four kilogrammes of marijuana.

Like most rappers in the US, who start off as drug dealers and then pursue their music professionally to becoming stars, Kid Lyrik had seen himself take the same path.

Kid Lyrik, who is now staying with his uncle in Marlborough in the capital, opened up about his gangster lifestyle that included, drug dealing, women, owning a gun and getting intoxicated basically on a daily basis.

“I left Zimbabwe when I was eight, at that time I was staying with my grandmother in Chitungwiza, both my parents’ were already in the US.

“I was staying in Texas-Dallas and over the years, I became good friends with many cowboys, some who later who became my marijuana suppliers.

“I considered drugs after I lost my dad in 2009, I was very close to him than I was to my mom and losing at a time when I was graduating from high school the next year kind of affected me.

“My dad had separated with my mom and he had moved back to Zimbabwe where he died.

“From there I started taking drugs then went to selling marijuana.

“I would take cocaine too but it wasn’t my trade,” he said.

He said he had two accomplices that helped him sell the marijuana, his two girlfriends he stayed with, one named Kara and other Sally Gee.

He added he slept like a king, as he would get sexually engaged to both of both at the same time (three-some).

“I met these two girls when they were already dating each other, they were bisexual and after the three of us clicked everything was good.

“They would do anything for me from selling the marijuana to just anything.

“It was also good business having the two girls play front as it brought in many customers.

“I was making around a thousand dollars a week a selling one gramme for ten dollars.

“I wasn’t rich but it was good money, I was comfortable and lived the lifestyle I wanted.

“I was also making around US$150 a day from my snapchat account,” he said.

As a drug dealer, Kid Lyrik said he also owned a gun and at some three point had three guns that he used a couple of times.

Kid Lyrik said he was growing popular around Texas with his music, which he produced and wrote on his own.

He became popular, got the attention around Texas and was performing at small and big events in the city.

“My music was basically about drugs, sex and money but I always wanted my music to have a deeper meaning combining that, so I started to teach myself sociology and psychology.

“As a rapper I knew it would take me global.”

However his music-gangster lifestyle came to an end when he was arrested.

He spent nine months behind bars and from there he was deported back to Zimbabwe.

“I never saw myself coming to Zimbabwe I just thought after my release I am going back to my lifestyle.

“I produced the EP with the help of my young brother Blawu.”

Kid Lyrik still strongly believes he can go global with his music and has recently released a song entitled “Coming to America” produced by Oskid.

“I was already making ‘noise’ in Texas with great potential of blowing up in other states in America and that dream for me still lives on.

“I have great faith I will make it with my music.

“I also want to study sociology and psychology majoring in mass communication, hopefully next year I start my studies,” he said. H-Metro