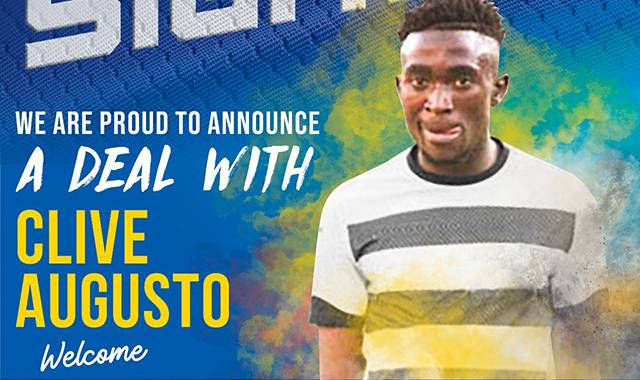 The club on Monday posted on its website saying they are delighted to wrap up their transfer business with the arrival of Augusto.

Augusto, who has won three player of the month awards in a row, was the leading scorer in the Castle Lager Premiership with 14 goals.

“Maritzburg United are delighted to have wrapped up their transfer business with the acquisition of Clive Augusto, who top scored in the Zimbabwean Premier Soccer League for Chicken Inn last season.

“The 25-year-old Harare-born marksman found the net 14 times in the league and will boost a Team of Choice forward line already boasting the likes of Judas Moseamedi, Mohau Mokate, Thabiso Kutumela and Bongokhule Hlongwane,” wrote Maritzburg.

The former Ngezi Platinum star has penned a three-year deal with an option to extend for further two years.

“The coach has been following him for a while,” said Maritzburg chairman Farook Kadodia.

“He scored 14 goals in 18 matches last season and had been on not only the radar of our club, but of other teams as well.

“As such we are delighted that Clive has chosen Maritzburg United and we’re confident that once he has settled in he will prove to be a valuable member of our squad, adding more goals up front.”

He joins countryman Gabriel Nyoni who joined from CAPS United who signed for the Team of Choice last month. H-Metro

Chinyoka on Tuesday: Those with real power don’t need to use it