By Nqobile Tshili and Andile Tshuma

Three people who were testifying in a court case involving a police officer who was arrested for allegedly sexually abusing 21 pupils at Bulu Primary School in Mangwe District died while nine others were injured after a vehicle they were travelling in hit two potholes and overturned at the 56KM peg along the Plumtree-Mphoengs Road, police confirmed yesterday. 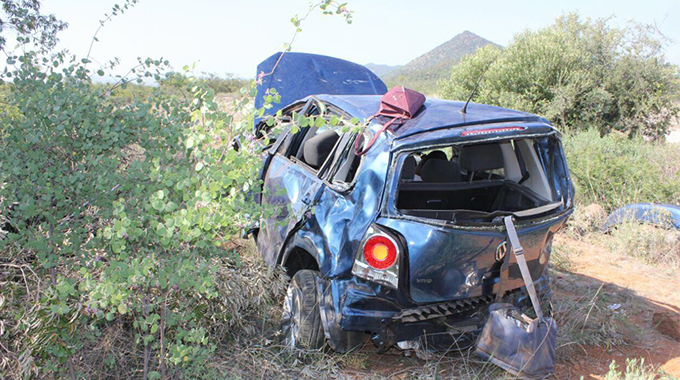 National police spokesperson Assistant Commissioner Paul Nyathi said the accident, which happened on Tuesday, claimed the lives of a teacher, a guardian and a pupil from Bulu Primary School.

“I can confirm that three people died while nine others were injured when a Nissan pick-up they were travelling in hit a pothole and burst its left rear tyre resulting in the driver losing control of the car which hit another pothole before breaking its axle and overturning,” said Asst Comm Nyathi.

He identified the deceased as Perseverance Zivanai (46), Mary Nandi Dube (32) and Sharon Ncube (14). Dube and Ncube died on the spot while Zivanai died on admission to Tshitshi Clinic.

The victims were returning home after testifying in a court case involving Constable Peter Muzulu (35) who is accused of abusing 21 pupils at Bulu Primary School while investigating a sexual abuse claim at the same school.

Assist Comm Nyathi said the driver and eight other passengers – four teachers, three pupils and two other guardians- all witnesses in the case, escaped with various injuries and are admitted to Plumtree District Hospital and United Bulawayo Hospitals.

He urged motorists to avoid travelling at night as this reduces their chances of being involved in accidents.

Asst Comm Nyathi dismissed claims that there could have been foul play which could have caused the accident.

“This is an unfortunate accident and we do not want to read anything into it besides that. If there are any comments or suggestions from any quarters, as police we are not privy to that,” he said.

Bulilima-Mangwe Senator Cde Simon Khaya Moyo mourned the death of the accident victims and wished the injured ones a speedy recovery.

“I have learnt with shock and dismay of the untimely and tragic demise of three people (including a pupil) in a horrific truck accident on the Plumtree-Brunapeg Road with others severely injured and admitted to Plumtree District Hospital and United Bulawayo Hospitals respectively,” he said.

Cde Khaya Moyo said such accidents will sadly continue to occur and claim lives if roads in Mangwe and Bulilima districts are not attended to.

“Such accidents tell the story of the terrible state of roads in Bulilima and Mangwe Districts which need urgent attention if lives are to be saved.

“Urgent action needs to be taken to complete the tarred road from Plumtree to Maphisa growth point as it stopped at Tshitshi more than 10 years ago. The same applies to roads in Bulilima District,” he said. The Chronicle