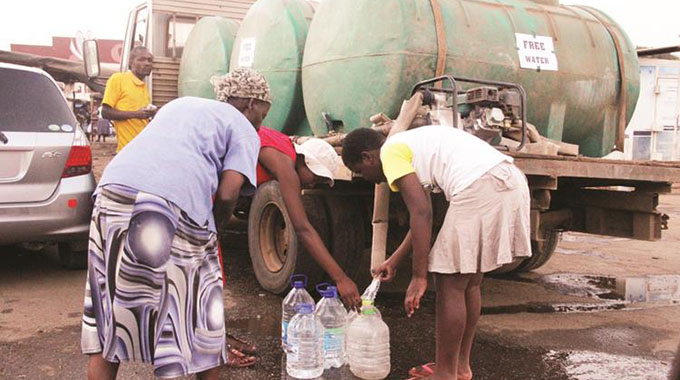 Harare City Council has decided to procure at least 12 water bowsers as part of measures to ease water woes affecting all parts of the city due to drought and shortage of chemicals, an official has said.

“Currently, we only have one bowser and we have requested 12 more to be procured through devolution funds,” he said.

“We have not been spared by electricity load-shedding and as such our pump stations get affected,” he said.

“We have engaged Zesa on the matter to at least exempt the water pump station from electricity disconnection.

“They agreed orally and we hope that they will honour their promise.”

Clr Keith Charumbira said it was important that the Kunzvi-Musami dams projects be fast tracked as long term solutions.

“12 bowsers are not enough, at least 20 can do and they must be placed in areas where there is critical erratic water supply,” he said.

“It is crucial that a team be selected and visit the ZINWA and water ministry as soon as possible and be updated on how far Kunzvi-Musami dams project has gone. It is time to put pressure.”

City mayor Clr Herbert Gomba (pictured) suggested that a team be sent to South Africa next week and get a deep insight of how mobile treatment plants can be adopted by the city initially for Gletwyn and Upper Chivero.

Councillors called for the drilling of more boreholes around the city which are electrified or solar-powered.

Eng Moyo said it was not feasible to have solar-powered boreholes around the whole city.

“According to the geology, Harare is sitting on granite and as such we do not have much underground water,” he said. “It means the water runs out quickly. That can only be done in some selected areas.”

Councillors blasted the management for failing to address water leakages due to shortage of essential spare parts.

They said it was not fair to collect money from ratepayers for services they were failing to render, as most households hardly accessed tap water and the teams fail to repair due to lack of spare parts. The Herald