“This is what we’ve been yearning for,” are words which were said by most artistes who attended and performed at Oliver ‘Tuku’ Mtukudzi’s tribute concert held at Belgravia Sports Club on Saturday. 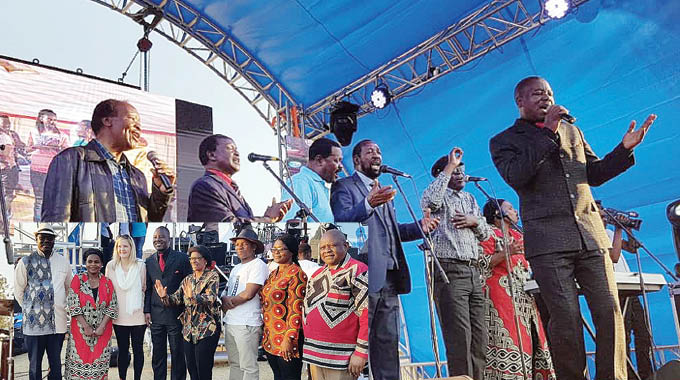 The event united artistes as they thronged the venue in their numbers to celebrate Tuku. It was also nice seeing the artistes, with their families, freely mixing and mingling with people.

This was a rare sight because at most shows, artistes usually pitch up a few minutes before they perform, but for this concert, most, especially the likes of Zex Manatsa, Mechanic Manyeruke, Bob Nyabinde, Selmor Mtukudzi and husband Tendai Manatsa, were at the venue very early.

It was entertainment galore as the star-studded line-up which had the likes of Sandra Ndebele, ExQ, Enzo Ishall, Bonnie Deuschle, Berita, Obert Chari, Peter Moyo, Black Spirits and Steve Dyer kept people well entertained. Basically, there was something for everyone as the artistes from Zimdancehall, afro-jazz, hip hop, gospel, urban grooves and RnB appealed to diverse audiences.

Other than celebrating Tuku, this show was dear to the artistes as it was a sign that finally, the National Arts Council of Zimbabwe (NACZ) and its parent ministry – the Ministry of Youth, Sport, Arts and Recreation – were doing something for artistes. Over the years, local artistes have felt let down by these two institutions whom they feel do not support them enough.

Bob Nyabinde, who was impressed by the event’s co-ordination, suggested that it become an annual fete.

“This show was a very brilliant idea which I feel should be an annual thing because Tuku was a legend who touched all generations. We really appreciate those who initiated this but please, let it be held annually,” he said.

Asked if the up-and-coming artistes have what it takes to reach Tuku’s level, Nyabinde said the onus was on them to train the young artistes.

“The best way is to demonstrate and let them appreciate. Tuku always said an artiste should be able to at least play one instrument or two and he inspired a lot of youngsters, looking at those from Pakare Paye.

“With time, we’re going to get youngsters coming back to the old style but it needs a lot of time,” he said.

Munya Mataruse, a protégé of Tuku, said he was glad that NACZ was finally doing something for artistes.

“This is a very good concept. The NACZ hasn’t had any funding from the government so this is good for us artistes as we’ve been asking them to hold events for us but they couldn’t because they didn’t have funding. I guess this is the beginning and we’re happy as we’ve been crying for this. We hope it’s going to continue happening and that they get more funding,” Mataruse who is based in Canada said.

“This show is the first of its kind to honour a legend of Tuku’s calibre. I want to thank the government and NACZ for this initiative. I know the country is going through tough times but yet they managed to organise such a show,” he said.

The event was however, spoiled by a very poor attendance likely because of an Econet network service interruption which affected mobile money platforms like EcoCash, making it impossible for people to pay to enter the venue. Most were left stranded at the gates as they could not even make calls.

Mechanic Manyeruke suggested that the poor attendance could have been due to poor marketing.

“We didn’t tell people about this show on time but however, the show had so much potential. The organisers did a good thing in organising this event and I’d like to urge them to organise a similar show next year.

“This is the way they should remember us as artistes, dead or alive. We must be celebrated like this,” he said.

On whether NACZ was giving artistes enough support, Manyeruke said: “They’ve improved now because their Nama awards now come with a token so this is good. Artistes, other than recognition, also need money,” he said.

An emotional Berita who worked closely with Tuku and took him as her father said: “Tuku taught me so much about music before he passed on and wherever I go I carry his spirit with me. I learnt to keep growing and learning from Tuku,” said Berita who now runs her own record label in South Africa.

Ammara Brown who initially was not on the line-up but had to be invited after Steve Dyer requested for her as he wanted to perform a track with her, said she was happy that Tuku’s legacy was living on.

“It’s very emotional watching the Black Spirits up there without Tuku. I’m glad that his legacy still lives on well after his lifetime,” she said.

The remaining artistes, Ammara said,can make names for themselves too if they are focused and put in the work like Tuku did.

“Anyone who’s determined, focused and professional can do anything they put their mind to. A lot of people think music is about passion, but it’s not really passion, essentially, it’s about your drive.

“You have to have a certain kind of discipline and I think Zimbabweans are generally hard workers so I think we’re going to have a lot of artistes breaking through because of the circumstances,” she said.

Selmor, who has been holding shows in honour of her late father, hailed NACZ and the arts ministry for organising a similar, but bigger show.

“This show was fantastic. It was a brilliant idea. I’m humbled and honoured to be part of it and I’m very pleased that they came up with the idea to do it in the very first place,” she said.

On keeping her father’s legacy alive, Selmor said she was taking things one step at a time. The Chronicle