Jimmy De Frenne, a 48-year old who is learning to be a bus driver, set himself a challenge of sitting for 165 hours on a toilet set up specially for the feat in the middle of a bar, but gave up on Friday morning after 116 hours. 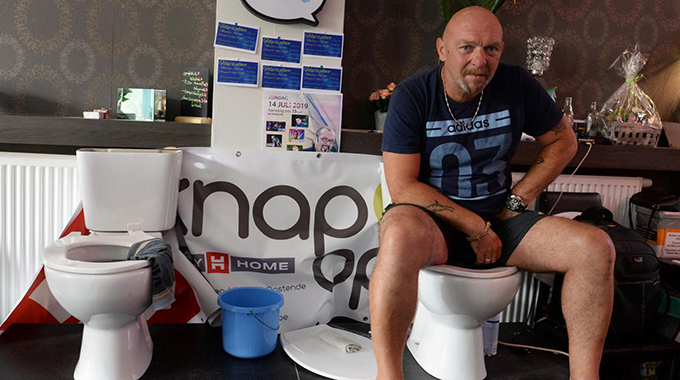 “Self-mockery is the best humour there is. Why am I doing this? Why not? There is nothing I like more than people making fun of me, because then I can do the same with them,” De Frenne told Reuters Television.

Filip’s Place bar in Ostend was open throughout, allowing De Frenne’s friends and family to stop by for a chat.

De Frenne was allowed five minutes off every hour, which he could accumulate over several hours to allow him to sleep. Ironically, he needed toilet breaks as his bar toilet was not plumbed in.

Picture: Dynamos supporters on top of a toilet

Sitting that long was not as easy as it might have seemed.

“I was very tired and my legs hurt but I believe in my success and try to make this record official,” de Frenne said.

There is no official world record for the sitting on a toilet, but De Frenne said he had discovered someone else had done it for 100 hours before.

De Frenne said Guinness World Records was aware of the record attempt and that local officials and witnesses were making checks to validate it.

No one was immediately available for comment at Guinness World Records. — Al Jazeera

Picture: Dynamos supporters on top of a toilet