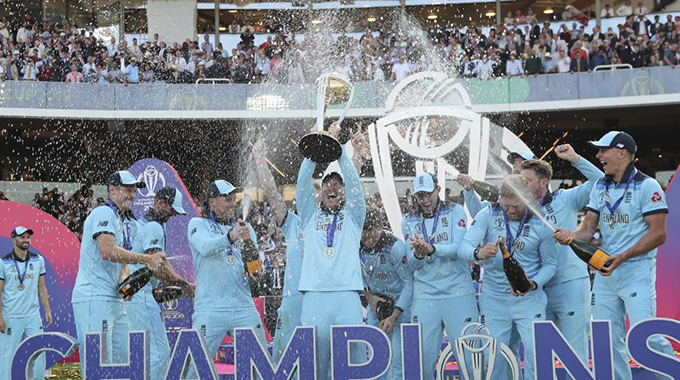 In a first for World Cup history, the final was decided by a Super Over after England were bowled out for 241 in 50 overs in reply to New Zealand’s 241 for eight after Kane Williamson had won the toss and elected to bat first.

With England having chased, they were to bat first in the Super Over with man-of-the-match Ben Stokes and Jos Buttler scoring 15 runs off Trent Boult’s over. In reply, New Zealand had to score 16 runs from six balls bowled by Jofra Archer but Jimmy Neesham and Martin Guptill scored 15 runs off six balls resulting in the Super Over being a tie as well.

New Zealand needed two runs off the final ball to win the World Cup but Guptill was run out going for the winning run and because England had scored more boundaries in the regular match and Super Over combined, they were crowned 2019 ICC Cricket World Cup champions for the first time in their history, and fourth time of asking, condemning the Black Caps to their second-consecutive final defeat.

England soon found themselves at 86 for four when Lockie Ferguson (10-0-3-50) had Jonny Bairstow playing on for 36, but Stokes (84 not out) and Buttler (59) resurrected the chase and took it down to the wire with a wonderful stand of 110 from 133 balls for the fifth wicket.

Stokes faced 98 deliveries for his fifth half-century of the tournament, striking five fours and two sixes. But there was to be a twist in the tale as Ferguson had Buttler caught on the backward point boundary after the England wicketkeeper had struck six boundaries from 60 balls. Chris Woakes (2) lasted just four balls before top-edging Ferguson to Tom Latham behind the stumps.

Neesham then grabbed two wickets in his final over, having Liam Plunkett (10) caught by Boult on the long-off boundary and then bowling Archer first ball. Neesham could have had three wickets in his final over when Stokes launched Neesham down the ground with the ball following Plunkett’s dismissal, with Boult taking the catch, but the fielder stepped on the rope, handing Stokes one of his two six’s.

England needed 15 runs off the final over, bowled by Boult (10-0-67-0), with the first two deliveries failing to register a run. Stokes then launched Boult over mid-wicket for six to leave England needing nine runs of three balls.

More drama was to follow with the next delivery as Stokes charged back to complete a second run but the ball thrown in from the deep, struck his bat and squirted away to the third-man boundary, giving Stokes six runs and leaving England needing three runs from two deliveries.

New Zealand though never gave up as Adil Rashid (0) and Mark Wood (0) were run out at the non-strikers end trying to complete second runs leaving England all out for 241 and sending the final into a Super Over.

Earlier, a half-century from opener Henry Nicholls (55) and contributions from Latham (47) and Williamson (30) gave the Black Caps a fighting chance with a total of 241 for eight, similar to the total they defended against India in the semifinal at Old Trafford.

Disappointment from the New Zealanders was the fact that four batsmen made starts but failed to kick on with Guptill (19), Taylor (15), Neesham (19) and De Grandhomme (16) all being culprits.

Guptill looked aggressive upfront, striking two fours and a six from 18 balls, adding 29 runs with Nicholls for the first wicket but it was Woakes (9-0-37-3) who made the breakthrough, trapping Guptill in front and despite a review from Guptill, the right-handed veteran had to walk back to the changerooms.

Nicholls and Williamson then set the platform with a stand worth 74 for the second wicket off 102 balls before Plunkett (10-0-42-3) dismissed Williamson, caught behind by Buttler, and then had Nicholls playing on to his stumps.

Taylor was unfortunate to have been given out leg before by Wood (10-1-49-1) as there was no review left for him to use.

Latham tried his best to keep the innings going, striking just two fours and a six from 56 balls as Plunkett had Neesham caught by Root at mid-on before Woakes had De Grandhomme caught in the deep. Archer (10-0-42-1) bowled Henry (4) as New Zealand struggled finish off the innings with a flurry, scoring just 30 runs off the final five overs.