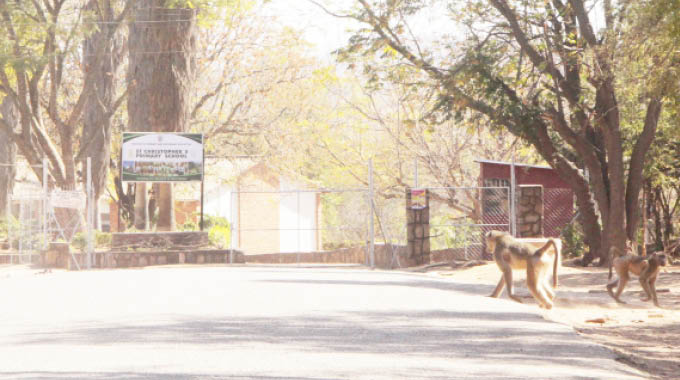 So daring are the baboons that they are reportedly disrupting lessons by entering the classrooms through the windows and snatching books, lunch boxes and bottles.

When a B-Metro news crew visited the school on Tuesday morning, it was greeted by a troop of baboons milling around the school gate apparently with the aim of pouncing on the pupils.

Pupils who spoke to B-Metro recounted their hair-raising encounters with the baboons saying they were regularly raiding their classes and attacking those carrying food.

CABS closes branch in Gwanda after three test positive for…

One Grade Five pupil said the attacks were now occurring on a daily basis.

“To avoid being attacked by the baboons sometimes we avoid sitting next to the window in a classroom or play close to the gate. These animals are very clever, as they wake up early in the morning to wait for us on our way to school as it is during that time we will be carrying the food,” said the pupil.

“As long as you are dressed in school uniform, they (baboons) don’t fear you. As you can see, they are waiting to pounce on us if we go outside or close to the gate,” said another pupil while pointing to a troop of baboons roaming outside the fence.

A staff member who refused to be named said the baboons were also breaking into cars and stealing food from the dining facility.

“The baboons attack children, ransack classes and damage cars. Children carrying food items are particularly vulnerable, that’s why they run after seeing them and get injured.

“Pupils, especially ECD learners are now afraid of going out of the school premises unaccompanied. If no timely action is taken then our lives and that of pupils will remain at risk,” said the staff member.

The headmaster of the school, Mr Temuso Dube declined comment saying he could only do so after being cleared by the education ministry.

He referred all questions to Matabeleland South provincial education director Mr Lifias Masukume who said he was unable to comment since he had not yet received a report on the issue.

“I will only be able to comment on the matter after receiving a written report from the school,” he said.

The problem was also shared by other residents living close to the boundary of the school.

A resident from the surrounding suburb Ms Clara Moyo who also claimed was a victim of the baboon attacks, said several people had received medical treatment after attacks.

“They attack my house every day and clothes are always being snatched. They also damaged my vegetable garden.

“We tried to kill them by smearing rat poison on food, but it’s as if they have a human brain — they never eat the poisoned food,” said Ms Moyo.

She, however, protested against a lack of action by Zimbabwe Parks and Wildlife Authority (Zimparks) to remove the baboons from the school premises and suburb.

Zimparks spokesperson Tinashe Farawo confirmed to have received a report from Gwanda saying action was going to be taken against the marauding animals.

He also warned residents against throwing any foodstuffs at the baboons and urged them to practice good waste management to ensure a clean environment that would contribute towards keeping baboons out of town. B-Metro