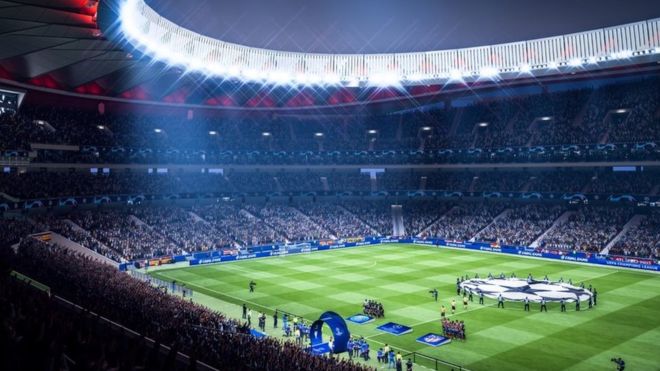 In Fifa, special players can be bought in packs, but the contents are only revealed after payment is completed.

The children’s father, Thomas Carter, had bought them a single pack for around £8, and had not realised they had seen how he made the purchase.

The Switch has now been confiscated “indefinitely”, Mr Carter said.

Nintendo has agreed to a full refund and has removed the purchased players.

While Fifa is published and sold by Electronic Arts, the payments had been made via the family’s Nintendo account.

Nintendo did not respond to a request for comment.

Mr Carter, from Hampshire, admits that he did not take full precautions to limit access to his Nintendo account: he did not use a unique Pin number and the emailed receipts were sent to an old email address with a full inbox.

“I just never thought [the children] would do it,” he said.

He and his wife only realised what had happened when their card was declined elsewhere because their bank account was empty.

Fifa 19 has been certified as suitable for players from the age of three.

Mr Carter said his children, who are all under the age of 10, felt very remorseful and had not understood the impact of what they were doing.

However, he also said he felt that the in-game concept of buying player packs without knowing what was inside them was unethical.

“You pay £40 for the game, which is a lot of money in itself, but then the only way to get a great team is essentially by gambling,” he said, referring to online play.

“They spent £550 and they still never got their favourite player, Lionel Messi.”

Video games publisher EA, which owns Fifa, declined to comment but provided a link to its guidelines on controlling in-game purchases – this varies depending on the platform or console being used.

How to activate spending controls

Some devices are more complicated than others, here’s a quick (and not exhaustive) guide:

In 2018 the games news website Eurogamer published an interview with an adult Fifa player who discovered he had spent $10,000 (£8,000) in two years,after he issued EA with a Freedom of Information request.

He told the site it was “just not worth it”.

A new report issued by the organisation Internet Matters found that 26% of the 2,000 parents of four to 16-year-olds it spoke to were concerned about the amount of money their children were spending on in-game purchases.

Chief executive Carolyn Bunting said it is important for parents to remember to shield their games account passwords or Pin numbers, and also to have regular discussions with children about what is free in games and what costs money.

“I’m sure most children won’t want to be in a position where they have spent their own parents’ money on upgrades or in this case, new players on Fifa,” she said.

Last year Belgium banned the sale of video game loot boxes – special characters or rewards which can either be purchased or acquired through game play hours, but cannot be previewed in advance.

In June, Kerry Hopkins, the vice president of EA games, told British MPs that the boxes were “quite ethical and fun”, comparing them with Kinder Eggs, Hatchimals and LOL Surprise.

“We do think the way that we have implemented these kinds of mechanics – and Fifa of course is our big one, our Fifa Ultimate Team and our packs – is actually quite ethical and quite fun, quite enjoyable to people,” she said.

Prof Andrew Przybylski, director of research at the Oxford Internet Institute, said more data was needed in order to assess the impact of loot box-style purchases.

“Loot boxes and in-app purchases present parents with a new frontier of challenges,” he told the BBC.

“Though loot boxes look like gambling, we won’t know what their effects are until these companies start sharing their data with independent scientists.

“There isn’t good evidence it is gambling, but the very fact we don’t have hard data should be a concern.”