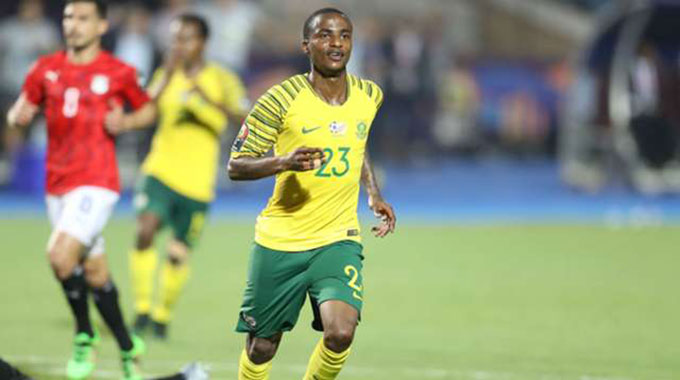 Nigerian legend Jay-Jay Okocha has given his thoughts on Orlando Pirates winger Thembinkosi Lorch ahead of his country’s Africa Cup of Nations tie against Bafana Bafana tomorrow.

Okocha, an Afcon winner in 1994, says he was rooting for Lorch to start in the last-16 against Egypt and the player justified his selection with a goal which sent Bafana into the quarterfinals, where they will face Nigeria.

Like many South Africans who were calling for Lorch to start a match at Afcon, Okocha says he too wanted to see the former Chippa United man on the pitch dazzling the opposition.

“I was also one of the people that was rooting for him to play because I know his qualities. This is the kind of player that makes football exciting. It was good to see him introduced and he justified the fans’ appeal,” Okocha said during a Carling Black Label media update event in Soweto yesterday.

Bafana are due to play the Super Eagles at Cairo International Stadium tomorrow night (21h00), and Okocha believes Lorch and Percy Tau could cause problems for Nigeria.

Nigeria’s president under pressure as insecurity…

“Of course you have to respect the opponent’s key players, especially if they are having a good tournament. It’s obvious that in the Bafana Bafana squad the threat was just [Percy] Tau, until Lorch was introduced.

It’s like they are sharing the responsibilities going forward now.

These are two players that could cause problems for any team and I’m sure we [Nigeria] are aware of that.

“But for me it’s also about being consistent.

You might be a threat today, but if you are not a threat in the next game, then it does not add value to the team because to go all the way you need to be the most consistent, especially during the knockouts.

“We are aware of his threat. He is a player that I like, I like exciting players. But for me it’s all about the team.”

Meanwhile, Egypt star Mohamed Salah said the team would try to learn from their mistakes after the 2019 Africa Cup of Nations hosts suffered an embarrassing last-16 exit.

The Pharaohs were billed as chief title contenders on home soil, having won three of four previous editions as hosts, but crashed out on Saturday following a shock 1-0 loss to South Africa.

The painful defeat came a year on from Egypt’s miserable World Cup campaign — their first appearance at the competition since 1990 — in which they failed to get out of the group stage after losing all of their matches.

“Very sad for our early exit from the Africa Cup of Nations. We were hoping to continue together till the end and offer the tournament for our loyal fans to whom I have to address a big thank you for the support we are used to from them,” Salah tweeted late on Sunday.

“God willing we will learn from our mistakes.

I wish the best for the national team in what is to come.”
Coach Javier Aguirre, appointed on a four-year deal last August, was sacked in the wake of the defeat while Egyptian FA president Hani Abou Rida also announced his own resignation.