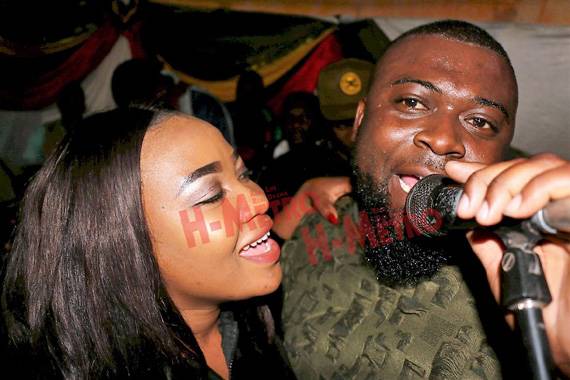 The Njanja Express leader launched his latest album Mudzimu Wabudira Pambeveve at the venue where Dr Tawanda was one of the guests.

Born Tawanda Kasaira, the versatile producer who built his music empire in Botswana, also took the opportunity to parade his wife Chomza.

The wife danced merrily at the event where she stole the show.

I am sorry, says Mark Ngwazi

“Luckily, I am using this launch to also unveil my South African wife Boipelo Mogwera Kasaira to Zimbabwe.

“Her stage name is Chomza, born and bred in South Africa in Mafikeng, in the North West province.

“She is an artiste having four albums under her Chomzatainment, all the album were produced by myself @ his Mega Bass Studios,” he said.

He said Chomza has also done a number of collaborations with a number of regional artistes.

“Chomza has done a lot of collaborations with the likes of Vee Mampeezy of Botswana, DJ Siya of Namibia, Dr Tawanda from Zimbabwe, Lady Storm of Zimbabwe, Romeo Gasa as well.

“She can dance and sing all at an excellent level, you all witnessed it here at Marka Ngwazi’s launch.

“We met in Gaborone, Botswana when she came from South Africa bvandabatirira ipapo,” he said.

“We have a son together called called Tawanda Junior ka-Doctor kadiki.

“My totem is Humba Makombe and we now use one totem.

“Since marrying her and in my musical career, I have never celebrated my birthday due to work, now this is my first birthday celebration.”

He said he will take the celebrations to other countries like Botswana, South Africa and Botswana.

“I am booked the whole month of July in Botswana because today (Tuesday), the of 5th July, I will be playing at Lagos Executive Lounge Block 8 with International DJs namely Munk, Benny, Benzo, Modric and a surprise act.

“My birthday theme is black and white and its jus a celebration since I have never done one since I became an artiste.

“My current bases are two, thus Botswana and South Africa, now and all my studios are located in all these countries as we speak.”

He also opened up on his achievements.

“I have achieved a lot in my life and arts career, God is one of my precious achievements after having 12 albums under my belt, dignity, fame, two houses in South Africa.

“Currently, I have a video called Kaditshene and we have two more coming and the name of that group is Nomtiti based also in Mafikeng.” H-Metro

I am sorry, says Mark Ngwazi