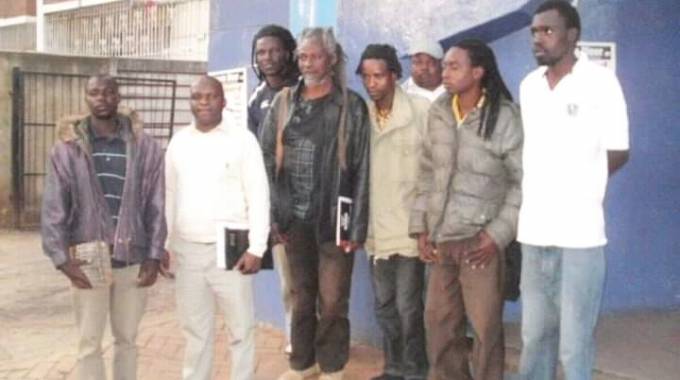 Dziva reMbira group leader popularly known as Tavirai in the local drama Tiriparwendo claims the spirit of working with traditional healers is similar to that being used by prophets in performing miracles.

In a one on one with H-Metro’s ARRON NYAMAYARO (AN), VIRIMAYI EDMORE NHEDEGA (VN) said his shows are being attended by people coming from attending church services and some get possessed with spirit mediums whenever they hear mbira music.

AN: Is it true that some of your fans got possessed by spirit mediums during the show and some are church goers?

Bishop CB Matondo claims there are no true prophets in…

VN: Spirit mediums are not different from prophets since the two work with super powers and their source is the spirit.

If prophets are to tell you the truth, you will discover that they once got possessed with spirit mediums or something has been said on them about masvikiro before they turn to God.

We differ only with those who after getting rich quickly by visiting sangomas to get spirits of other totems kwamunoti kuromba kanakuda kusvikirwa zvisiri mauri.

We are not there to fight prophets or their faith but we remain rooted in our culture waiting for those who get carried away by their faith in respecting other nations’ tradition or culture.

I am not against modern things like dressing or technology but we embrace all that without forsaking our ancestors like what westerners do by respecting their ancestors like Abraham, Moses and the like who made history in their time.

We have whites who are marrying our sisters here to prove that they like our culture and they follow our shows for mbira and feel blessed. These whites are similar to Africans who like western culture and they must not be condemned for doing this.

Our ancestors are like your personal shadow mumvuri unogara newe kusvikira pakufa so we must not forsake our spirits because we are living in better places or having much wealth to travel anywhere in the world.

We have a number of former prophets who are now active in spirit mediums and using herbs in healing as traditional healers.

Traditional snuff is accepted anywhere including in aeroplanes and we are not affected to find places where it is written no smoking.

When our fans got possessed during the show we continue playing Mbira and some who are familiar with spirit mediums attend to them.

AN: Does the spirit come out when mbira is played or they are being fanatic during the show?

VN: It’s not being fanatic but mbira music is powerful and whenever we play it we take traditional snuff and this brings us close to our ancestral spirits, they open new doors for us and communicate with us through dreams. Mbira is called Nhare which is similar to a phone so whenever it is played it sends a message to ancestors that is why it is mainly played at traditional gatherings.

As for those who manifest during our shows we give honour to our ancestors by proving to us that we are playing the right codes that reach the spiritual realm.

We do not charge our fans money but we have a wooden plate where anyone who knows how spiritual mediums are observed, they drop money, expensive linen or anything of value as a way of honouring kwatinoti kupfupira kanakuti kupembedza mashavi.

It is the same as is done at churches and this is one other way which is similar to what our ancestors taught us that Christians learnt from missionaries.

VN: I was born on Christmas Day 33 years ago in Shamva under Mashonaland Central Province.

I started my childhood journey of thousand miles full of tears and sorrows in a poor family of six children and I was the fourth born.

My father Vinneck is disabled following the liberation struggle where he participated in and my mother Tithiwe Mushawatu is a peasant farmer.

I did my primary level at Chindotwe Primary School and proceeded to do my secondary level at Rutope High School in Shamva.

AN: How did you start your music career?

VN: It all started with dancing. Most of the days when I came back from school I used to take the radio outside, placing it on the veranda of our tuckshop run by my father and shoppers would watch me showing my dancing antics.

I had a remarkable ability to imitate dance moves of Michael Jackson, Kanda Bongoman, Mr Bean the comedian just to name a few at a tender age of seven in the early 90’s.

The first man who inspired me and took my heart in playing music instruments was my uncle Tendai Mushawatu (the late) who was in the music industry.

He was a musician and he was one of the late Simon Chimbetu and John Chibadura’s friends. He was talented in paying various musical instruments including Mbira, guitars, marimbas and drums.

He is the man I copied playing musical instruments and I had to make my own guitar using cooking oil empty tins ataiti mabhanjo.

I started composing songs and this is how I fell in love with music. My father got impressed with my songs and he decided to buy me an acoustic guitar that I loved to an extent of sharing the same bed with it.

Dziva rembira means the pool of Mbira music. This name came out from a true story when I was in grade 5, my big brother Edson and I went to a river called Mudotwe River for a swim in Musana Shamva area. During a swim we enjoyed some competitions of going deep into the water spending some seconds beneath the water.

I was not good at this , when my brother got in he got out after some seconds shouting there is something hooking my leg, when he got out we saw his leg bound with mbira instrument with chains. That was the first Mbira at our home. At the time nobody knew how to play it. Everybody tried and they couldn’t play it except myself.

From the village I moved to Harare where I joined renowned Mbira groups that included Akurara Mbira vibes and later on Mbira dzenharira.

After two years playing with Mbira Dzenharira I moved and formed Dziva Rembira which I lead and is composed of four members at the moment.

AN: Who inspired you to start your own group?

VN: I was inspired by Kireni Zulu who invited me to play Mbira before his show where I watched a crowd dancing to one instrument I played before he played his guitar.

It surprised me and I discovered that I was wasting time by waiting to have more instruments or form a group that attracts a sizeable number.

I witnessed Marabi queens led by Zulu and this inspired me as they danced to one instrument in Chitungwiza and Kiren kept on encouraging me and at one time I released a jazz song where I mixed Mbira and guitars.

I received invites to play Mbira at various villages alone and it worked much until I saw it fit to join others to make it melodious.

AN: What have you achieved so far in playing mbira?

VN: We have worked on a number of projects that have been a success and brought satisfaction to the local community.

We recorded the first album Makurutese in 2012, it has 7 tracks of Mbira music.

Due to financial problems it took me four years to release the second album and I used that time to try my hand at acting.

I acted in a number of films on TV including Tiriparwendo film production that I featured as Tavirai a mbira music player of Changamire Chabvonga at his palace.

In 2015, I released an action film called Tale Of The Box starring as Walter the main actor, who was a ruthless, selfish and cruel thief who killed his own father.

In 2017, I released my second music album called Chidhamu dhamu. The album consists of 8 songs and the first five songs I fused the guitar and mbira in the Afro Jazzy Genre, and the last 3 songs I did them with Mbira.

It is worth mentioning that Dziva Rembira is performing at weddings, corporate functions apart from performing at Night Clubs and Restaurants.

We are looking forward to release our new album this year. H-Metro