Sections of the Draft Marriages Bill 2017, which seeks to provide for civil partnerships — better known as cohabitation — will legitimise ‘small houses’ if passed into law, a legal expert has said. 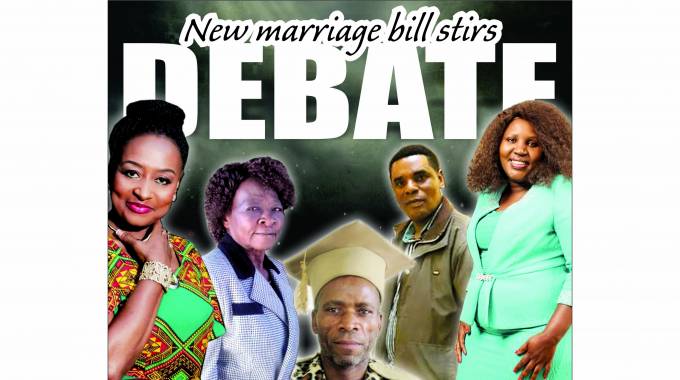 The Marriages Bill is one of the 27 proposed bills, which are part of Parliament’s 2019 legislative agenda. The Bill seeks to create one Act governing marriages. It also seeks to align with Constitutional provisions replacing the Customary Marriages Act Chapter 5.07 and the Marriage Act Chapter 5.11.

In addition, it also seeks to have unsolemnised customary law unions registered within three months from the date at which they were entered into.

While it seeks to align with Constitutional provisions on gender equality, protection of children from sexual exploitation and banning of child marriages, a raging debate surrounds Section 40, which seeks to legitimise cohabitation.

Zimbabwe’s Marriages Bill a threat to the existence of LGBTI…

Section 40 Sub-Section 5 of the Bill clearly states that: “A civil partnership exists notwithstanding that one or both of the persons are legally married to someone else or are in another civil partnership”.

Earlier sub-sections define a civil partnership as (1) a relationship between a man and a woman who a) are both over the age of eighteen years; and b) have lived together without legally being married to each other and c) are not within the degrees of affinity or consanguinity as provided in Section Seven; and d) having regard to all the circumstances of their relationship, have a relationship as a couple living together on a genuine domestic basis.

Legal practitioner Mr Davison Kanokanga said in simple terms, Sub-Section 5 means that a married person can enter into a civil partnership while married.

“It doesn’t matter that you are in a monogamous or a customary law marriage, you can enter into a civil partnership while married.

This provision has raised questions on possible far-reaching consequences on the dynamics surrounding marriage and the family set-up. Apart from implying that adultery damages will be outlawed, Mr Kanokanga said legitimising cohabitation detracts the sanctity of marriage and could be an easier route for young men desiring to marry but struggling to make ends meet.

Mr Kanokanga said he foresees the courts having to deal with a lot of matrimonial issues if this Section is to be enacted.

“Now these will have their own issues which the courts have to resolve. Now we add civil partnerships to the mix. You may be married, only to be confronted with summons from your spouse’s civil partner claiming that they made a contribution towards the television set in your house or the set of sofas in your house.

“So there is likely to be chaos as a result of this Bill because what people refer to as small houses at the moment will be legitimised if this Bill is passed into law. The stigma will then be taken away because the law will be recognising them,” Mr Kanokanga said.

In enacting laws, Mr Kanokanga said a nation needs to go back to its values and make progressive decisions.

“I can see that the lawmakers where trying to protect women, especially those ‘small houses’, but I suppose one of the questions that we must ask ourselves as a nation is whether everything and anything requires legal protection?

“Remember, in the preamble to the Constitution, we say that as a nation we uphold the supremacy of God Almighty. If something is unGodly should we accord it legal protection?

“Look at a situation where let’s say a woman is well aware that the man she is involved with is in a monogamous marriage. Notwithstanding that knowledge, she goes ahead with that relationship and they go on to acquire properties etcetera, and they conduct themselves as if they are a couple.

“Should such a woman be accorded legal protection? Is what she is doing morally correct? What are we doing by legitimising these cohabitations? What effect does it have on our moral fabric?

“If we value marriage, does this add to that value? We should not just introduce change for the sake of change, your change must be progressive, it must be positive and it should not detract from our values. If we uphold Christian values as we purport to be, if we uphold moral values as we say we do then anything that is a departure from those values should not be condoned,” said Mr Kanokanga. Sunday Mail

Jah Master slammed after unleashing flying kick at fan on…

‘Not sanctions but corruption’, EU, UK, US tell…