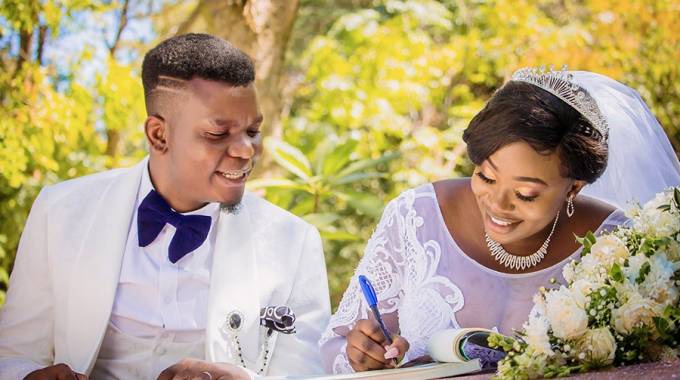 The Military Touch Movement artiste took to Instagram this week and posted a picture of their wedding, which took place on May 1 at Tiffany’s Grant Estate.

The wedding ceremony was attended by fellow MTM members among them Jah Prayzah.

New Guy told H-Metro it was not easy for him to ‘tie down’ Trish, which probably got him sing one of Makion’s songs Makorokoto, after winning her heart.

“We met at church and instantly I fell in love with her. I had been invited by a friend for one service and that changed my life,” said New Guy.

The Do Wachu Do singer said he had to abandon his childhood church to join Trish’s church.

“I left the church I was going then and started to pursue her though it was awkward interacting with her the first few days.

“I was a bit nervous whenever she was around and would forget all the little pickup lines, even a normal greetings was not easy for me and I’m sure she noticed I had fallen for her.

“When the perfect opportunity came I gathered the courage to get her number and then easily we started having conversations and that turned into long midnight conversations,” said New Guy. H-Metro