Dynamos supporters turned against their team and reminded coach Lloyd Chigowe that his days at the helm of the Harare giants are now numbered after the out of sorts Glamour Boys side suffered a fourth straight defeat in all competitions yesterday. 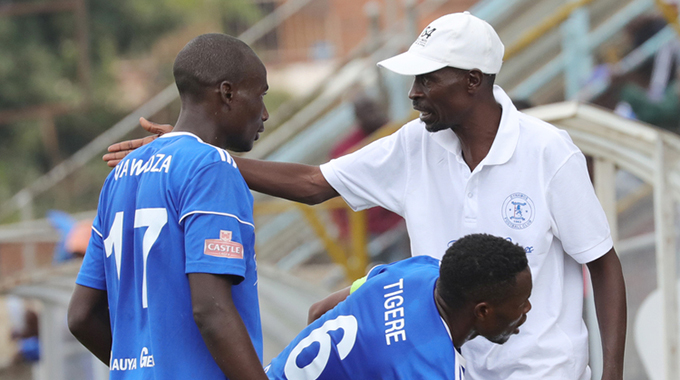 Minnows Herentals became the latest team to pile misery on Dynamos and intensify the heat on Chigowe at Rufaro yesterday.

The lanky coach even ducked the post match media conference which should now attract a fine for him from the Premier Soccer League.

The supporters caused mayhem at the main exit at Rufaro demanding Chigowe’s head after Herentals midfielder Juan Mutudza had compounded the Glamour Boys’ woes with the winner, four minutes from time.

DeMbare needed to bounce back from a depressing run that started with the 1-2 home defeat to Hwange two weeks ago.

The pressure has been mounting in their camp after losing 0-2 to Chicken Inn and following last week’s Independence Cup final defeat at the hands of old rivals Highlanders by an identical margin.

But the Glamour Boys didn’t show the hunger to win yesterday.

They were a tedious lot from the start against a side that featured 47-year old striker Innocent Benza who lasted the 90 minutes, probably underlining how much DeMbare have become so pathetic and so toothless.

Mutudza yesterday buried the winning goal from close range after DeMbare had failed to deal with an aerial cross from substitute Prince Chama.

Then things took an unexpected turn as the dejected Glamour Boys supporters openly disowned their own and instead started cheering Herentals’ every move.

Tensions had already been simmering in the terraces over the unpopular decision by Chigowe to remove Congolese striker Ngandu Mangala who looked the better player among the lot.

The Vietnam stand, which houses the bulk of the Dynamos fans, burst in a huge chorus of disapproval reminding Chigowe that he is standing on shaky ground as they sang “Ma Blanyo paumire pakaipa’’.

The anger then spilled outside the stadium where police had to beef up security to disperse the crowd.

Assistant coach Murape Murape appealed for patience from the supporters.

Murape said the supporters needed to understand that the side they have this year “is a completely new team and may need time to get their act together’’.

The former Dynamos skipper said supporters were free to express their displeasure because results are not coming as the Harare giants fans gave Herentals a standing ovation after the game while their own players walked back to the dressing rooms in shame.

“Football is a game of pressure, so it’s part and parcel of the game. I think as a team we are not yet mentally strong and the confidence among the players is still low.

“It’s a new team and sometimes results might not come early. But as Dynamos we know week in and week out you have to get results and if you don’t do that obviously the supporters will go against you because they are used to winning,” said Murape.

Herentals coach Kumbirai Mutiwekuziva believes the win over Dynamos was special in that they had to beat the most successful team in the country to get their first set of points as victory had eluded them in their opening three games of the season.

“First set of points for the first time this season, I think this is the most important thing for the club especially winning against one of the most popular teams in Zimbabwe.

“It makes us feel good and also in terms of confidence building, they boosted our guys. We have not been playing well of late but taking three points against Dynamos will only boost us ahead of our upcoming games.

“We were a bit under pressure but we managed to handle our pressure better than Dynamos. So we capitalised on their pressure and we got the points,” said Mutiwekuziva.

The writing was always on the wall for Dynamos. To show that things are not moving in the right direction, the attendance in the terraces yesterday was markedly decreased compared to their opening games of the season.

Chances were few and far between for both sides but Tinotenda Muringai’s grounder almost slipped through Herentals goalminder Frank Kuchineyi’s legs in a goalkeeping gaffe midway through the first half but the goalkeeper quickly recovered to collect the spill before the ball crossed the line.

Defender Munyaradzai Mawadza’s free header from a corner by Muringai went over as he couldn’t control his effort.

Herentals also had their opportunities and midfielder Kevin Bingala shot over after DeMbare had failed to deal with a throw into the box.

Skipper Blessing Majarira was released by Mutudza but the midfielder sent his effort wide off goal when coming face to face with the Munyaradzi Diya after 36 minutes.

Dynamos’ Tawanda Macheke had his shot blocked by the keeper after Mangala beat two defenders on the byline and made a low cut back to the centre.

DeMbare’s best chance fell to Emmanuel Jalai in the 83rd minute but the diminutive player could not find his feet before Kuchineyi was called to thwart a dipping shot from substitute Tanaka Chinengeta.

Midfielder Godfrey Mukambi almost saved the blushes for the giants with a long range shot that came off the upright in added time. Yet it was too late to win back the DeMbare supporters who were apparently angered by the decision to substitute Mangala.

Murape was at pains to explain the decision.

“What we expect from the supporters is to support whoever gets in. But if they start denouncing them with their songs then it means the youngster’s confidence will be affected,” said Murape.

Dynamos have one win and three defeats in the opening four league games while Herentals now have five points in as many games.