A funeral wake in Zhombe turned bloody as members of the bereaved family turned against each other resulting in the chief of the area allegedly being manhandled as he tried to intervene. 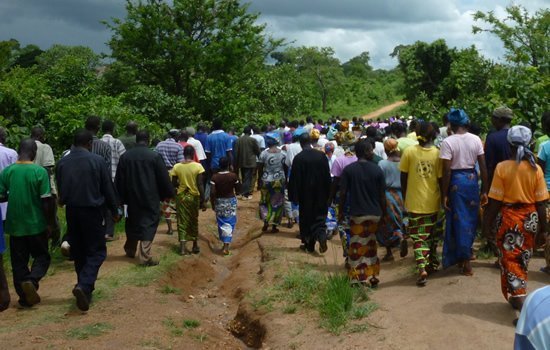 There was misadventure at the funeral wake of Nkululeko Nkomo in Zhombe Mission after Chief Weight Gwesela was reportedly beaten up by the deceased’s children as he tried to stop them from beating up their uncle Jivava Nkomo whom they blamed for their father’s death.

According to a source who attended the funeral wake, all hell broke loose when Prince Nkomo and Vusa Nkomo, sons of the late Nkululeko who died mysteriously, tried to chase their uncle from attending the funeral as he had “killed” their father.

The two then turned against the chief and delivered some punches as he tried to stop them from beating up Jivava Nkomo whom they accused of killing their father.

Burial was delayed as some injured people had to be ferried to Zhombe Mission Hospital for treatment after machetes were thrown around turning the funeral wake into a battlefield.

“The chief was not seriously injured but he was beaten up by the angry children of the deceased. He was trying to play his role and mediate so that the burial would go on smoothly. But they turned against him and beat him up before they went back to beat up their uncle,” revealed the source.

The late Nkululeko worked for the District Development Fund (DDF). He died mysteriously after a short illness, and their children suspected their uncle, Jivava, to have played a role in their father’s death.

Jivava is also the village head.

Chief Gwesela confirmed that there was chaos at the funeral but denied reports that he was bashed.

“Of course I was at the funeral and there was a misunderstanding as the children tried to beat up their uncle. So I intervened and stopped the noise before the burial went on smoothly,” said the youthful traditional leader.

He said the two sons, however, were set to appear before his court for misconduct.

“Yes, I want two beasts from them for their actions, I cannot allow such a thing to happen in my area.

“They are set to appear in my court on 28 April and I want the matter to be reported to the police so that they also appear in the courts for violence. When we are seriously advocating against violence and they do such a thing, it’s a taboo and I want them jailed,” the chief fumed. B-Metro

Mnangagwa has no power to “direct” Zacc like this –…