The man who features on the disturbing video circulating on social media assaulting his defenceless worker with a baton for allegedly stealing his equipment was arrested and is expected to appear in court soon. 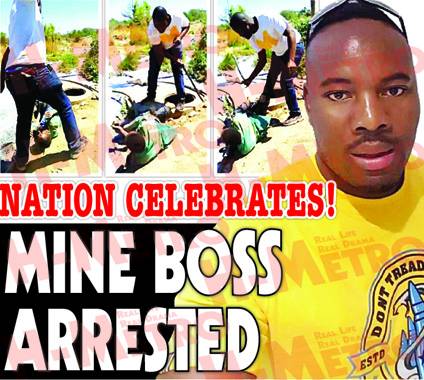 The video caused waves on social media with many calling for the arrest of the aggressor, Litten Chikoore, and calling his actions barbaric and savage.

Twitter was awash with comments and the majority did not care what the victim had done to invite the assault as it is wrong to take the law into one’s hands.

The Zimbabwe Republic police (ZRP) also took to social media to find both Chikoore and his victim, Pedzisai Mangisi, for justice to take its course.

“The ZRP is appealing for infor which may assist to locate the complainant in a social media post which went viral recently. In the video, accused person, Litten Chikoore of Kadoma is seen viciously assaulting the hapless complainant on the pretext that he had stolen from him,” tweeted the ZRP.

In a corresponding tweet the ZRP stressed the importance of identifying the complainant.

“While Chikoore has been located, the availability of the complainant will ensure that the law takes its course without delay. Members of the public can contact the Complaints Desk on telephone number 0242-703631 or CID Kadoma 06821-26600/27464 or any nearest police station,” tweeted the ZRP.

Social media responded and both parties were identified and located.

“The ZRP wishes to thank members of the public for the co – operation rendered in the inquires. The complainant Pedzisai Mangisi (30) has since been located while the accused person Litten Chikoore has been arrested,” read the penultimate tweet.

Police managed to locate the complainant and the necessary processes in terms of the law have now been instituted. Chikoore has since been arrested after he surrendered himself to police in the company of his lawyer.

National police spokesperson Assistant Commissioner Paul Nyathi confirmed the arrest advising and cautioning members of the public not to mete instant ‘justice’ but report to the police if anyone wrongs you.

“The Zimbabwe Republic Police would like to confirm the arrest of an accused person circulating on social media assaulting his worker after he surrendered himself to the police,” said Ass-Comm Nyathi.

“Police are concluding investigations and the accused person will appear in court any time soon for the law to take due course.

“Members of the public are advised to report to the police anyone who wronged them for the law to take its course.

“No one is allowed to mete instant justice on anyone,” said Ass-Comm Nyathi. H-Metro

CARJACKERS BONANZA . . . The smaller the car the bigger the deal