Three police officers, one of them a senior cop were arrested on Friday when they were found with 15 different types of guns, more than 180 live bullets and several other assortment of related armaments which were not accounted for by the force. 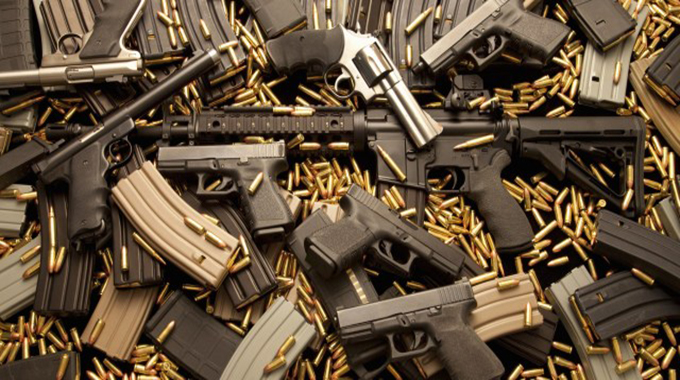 David Fugao, whose age was not given but is an Officer-in-Charge at the Matabeleland North Provincial Armoury (in Bulawayo), Wonder Tawanda Karamba (33), Francis Chaterera (39), who are both stationed at the armoury appeared before Bulawayo magistrate, Mr Jechonia Ncube, yesterday facing charges of criminal abuse of duty as public officers. They were remanded in custody to tomorrow for bail ruling.

According to the State as led by prosecutor, Mr Leonard Tshile, on Friday detectives from the Homicide Department received information that there were suspicious movements of firearms at the armoury. The court heard that the detectives through investigations found out that some members of the force were removing firearms that are subject to a handover-takeover from the armoury to a backyard room.

This was discovered, following the arrest of Fugao, after he was implicated by a suspected armed robber Ame Mpala, who was arrested with an AK-47 rifle along the Bulawayo-Beitbridge Road. When detectives arrived at the armoury they requested it be opened and a search was conducted in the presence of Karamba and Chaterera.

It was discovered after the search that there were several firearms that had been stored in the armoury that did not match any recorded on official documents. Some of the guns listed included 22 Birmingham Sport Company riffle, 12 Bore Winchester shotgun, 22 Bruno riffle, 22 Mauser long riffle, 303 Era riffle, 22 Kregskorte riffle, 22 Winchester riffle and 22 revolver. They were also found with more than 185 different kinds of live bullets.

The court heard that was when it was established that the two had been allegedly receiving firearms for repairs at the station workshop, which is not consistent with their duties leading to their arrest.

On the same day at around 7pm detectives received a tip-off informing them that there was a suspicious package that had been stashed at a house in Thorngrove. Upon searching the house they found an assortment of weapons and ammunition.

The detectives are reported to have interrogated the owner of the house Delighted Chingoyori who revealed that Karamba had left a parcel containing the firearms at her house, stating that she had given him the keys to the garage where the parcel was for safe keeping. Karamba is said to have admitted to owning an assortment of artillery. Sunday News.

Businesspeople who invested in football