Zifa president Felton Kamambo is confident the new deal to bring back Umbro as the official kit sponsors for the national teams will have huge benefits for the association. 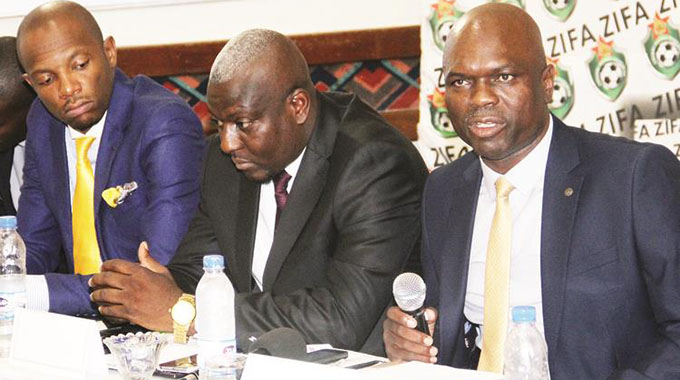 Umbro will supply a full consignment of training equipment, travelling gear and playing kits for all the national teams, including the women and various age-groups. The British sportswear manufacturers will also provide replicas for sale to the supporters with the first batch of the consignment expected before the Warriors’ AFCON qualifier against Congo-Brazzaville next month.

However, the major downside of yesterday’s kit sponsorship “unveiling ceremony” was that there were no samples presented at the official launch.

Kamambo, who was flanked by board members Chamu Chiwanza, Sugar Chagonda, Barbra Chikosi and chairman of FC Cape Town Consulting Errol Dicks, said the national association stand to benefit from a five percent royalty for the total sales of the replicas.

“Since our assumption of office at ZIFA, we have been working tirelessly to make sure that our national teams dress appropriately during matches, when they travel as well as during training.

“That is why we are here to officially announce that we have engaged Umbro as our official kit sponsor for the next three years. “We went to South Africa last week where we engaged quite a number of kit sponsors and we settled for Umbro because they were giving us the best deal. We are optimistic that our partnership with Umbro will enhance our visibility as a football brand.

“Umbro has the capacity to provide replicas for our supporters, unlike previously when it was almost impossible to get national team football jerseys.

“We have agreed on a five percent revenue of the replica sales. This will be revised each year, the five percent was just the starting point. The bulk of the other kit sponsors were far much less than that.

“Even Umbro initially were much less than the five percent but from the negotiations we managed to get that. We will also get some discounts if we buy replicas in bulk for resale,” said Kamambo.

The association have already submitted specifications to Umbro so that a kit will be available for the senior team and Under-23 Africa Cup of Nations qualifiers in March. Although the target has been agreed to sell one million replica sales in the next five years, an initial consignment of about 50 000 units is expected to be delivered before next month’s AFCON qualifiers.

Umbro sales director Bell said their company has a reputation and will not compromise on quality.

His counterpart Dicks gave guarantees that Umbro will deliver on their promises.

“All stakeholders have to play a major role in ensuring that we awaken this sleeping giant. And as the president rightfully said, we (Zimbabwe) no longer can be compromised as minnows on the African continent.

“We have compromised the brand for too long. The president’s briefing was very clear and when we engaged him and the executive on this journey, it was very clear.’’ Chiwanza said they have sold about 1 000 tickets through the various online platforms.

The tickets can be purchased using EcoCash, Visa card, Telecash and Vpayments and to avoid the chaos that usually obtains at the gates, ZIFA yesterday reiterated that there will be no ticket sales on match day. The Herald