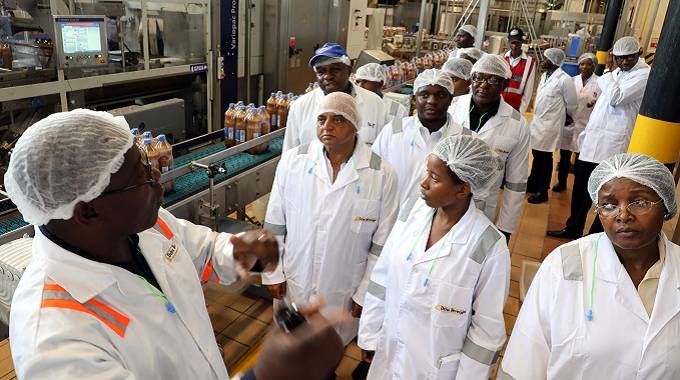 Briefing Industry and Commerce Deputy Minister Raj Modi before the tour of the plant yesterday, Fairbridge brewery manager Mr Witness Nkuziwalela said while the plant was largely procuring its major raw materials locally, it required foreign currency to import other raw materials and critical components such as spare parts.

“Some of the materials that we use are imported. We are also not spared from needing forex for our imported spares,” he said.

Mr Nkuziwalela would not be drawn into revealing the plant’s forex allocation and how much the company was spending in maintenance costs saying such details can only be revealed by the head office in Harare.

He said some of the factory’s equipment was de-commissioned two months ago due to lack of access to foreign currency to import spare parts.

Mr Nkuziwalela added, “Fairbridge has got utility charges and when I am talking about utilities I am talking of water, electricity and of late we can talk of coal.

“On the coal front we can talk to issues around the quality of the coal.

He said Bulawayo City Council supplies the plant with water but when the city council has water supply challenges the brewery uses a bowser, which becomes expensive in terms of transport.

The Fairbridge plant employs 106 workers while 80 others were stationed at its distribution networks in Beitbridge, Victoria Falls, Shangani and Plumtree.

In the past few years, Delta Corporation invested $21 million on its Fairbridge Chibuku Super plant in an effluent pipeline, which serves some communities in Umguza District.

Last month, the beverages manufacturer commissioned a $260 000 upgrade of a road junction that links Fairbridge plant with the Harare-Bulawayo Highway. The Chronicle