An Indian government minister accused of sexual misconduct by at least 12 women has said the claims are “wild and baseless” and filed a defamation lawsuit against one of his alleged victims.

Mobashar Jawed Akbar, India’s junior foreign minister, returned from government business in Nigeria on Sunday to face mounting allegations he harassed or abused employees during his previous career as a journalist.

“The allegations of misconduct made against me are false and fabricated, spiced up by innuendo and malice,” he said in a statement on Sunday.

“Accusation without evidence has become a viral fever among some sections. Whatever be the case, now that I have returned, my lawyers will look into these wild and baseless allegations in order to decide our future course of legal action.”

On Monday, he filed a lawsuit against the journalist Priya Ramani, the first of the women to name him as her alleged abuser.

The lawsuit, a copy of which was reviewed by Reuters, names Ramani as the sole accused and says she “intentionally put forward malicious, fabricated and salacious” allegations to harm Akbar’s reputation.

Akbar, 67, is one of the highest-profile figures to be named in the past fortnight as part of a wave of sexual misconduct allegations by Indian women that activists are calling the belated arrival of India’s #MeToo moment.

He had been silent since the first accusation surfaced on Tuesday, when Ramani claimed he was the unnamed editor she had described sexually harassing her in a 2017 article for Vogue.

At least 11 other women have come forward in the week since, the most recent on Friday when Majlie de Puy Kamp, a journalist with CNN in New York, said Akbar forcibly kissed her when she was an 18-year-old intern at his newspaper Asian Age in 2007.

“What he did was disgusting, he violated my boundaries, betrayed my trust,” De Puy Kamp told Huffington Post India.

Amit Shah, the president of the ruling Bharatiya Janata party, to which Akbar belongs, indicated on Saturday that the accusations would be looked at. “We will have to see if the allegations are true or false,” he said.

As Akbar prepared to return to India on Sunday, several media outlets reported that he would resign or step aside pending an investigation. Instead he came out fighting, claiming the allegations were part of a political conspiracy before general elections scheduled for the first half of 2019.

“Why has this storm risen a few months before a general election?” he asked. “Is there an agenda? You be the judge,” he said.

More than a dozen Indian journalists, actors and musicians have been accused in the past fortnight of behaviour ranging from making inappropriate advances to violent sexual assault. 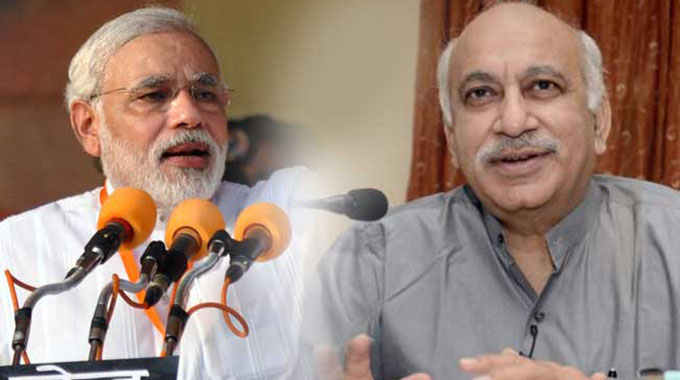 Chetan Bhagat, a bestselling author, made a public apology after a woman posted screenshots of a conversation in which he said he was trying to “woo” her. Alok Nath, an actor, has been threatened with expulsion from an industry organisation after he was accused of raping the screenwriter Vinta Nanda, an allegation he denies.

Akbar has been a prominent figure in Indian public life for decades as an author, the editor of several newspapers, a confidant of the former prime minister Rajiv Gandhi and now as the only Muslim minister in India’s Hindu nationalist government.

How the allegations against him are handled will be seen as an important indicator of whether the #MeToo accusations will usher in new standards for public figures.

Harinder Baweja, one of the women who has accused Akbar, wrote on Twitter that his response and legal threats were absurd. “All the women who tried to deal with the trauma for two to three decades and were now encouraged to share their pain had the general election in mind?” she said.

There are 48 members of parliament across India with cases registered against them relating to crimes against women, a quarter of them members of the BJP, according to statistics from the Association for Democratic Reforms thinktank. – The Guardian