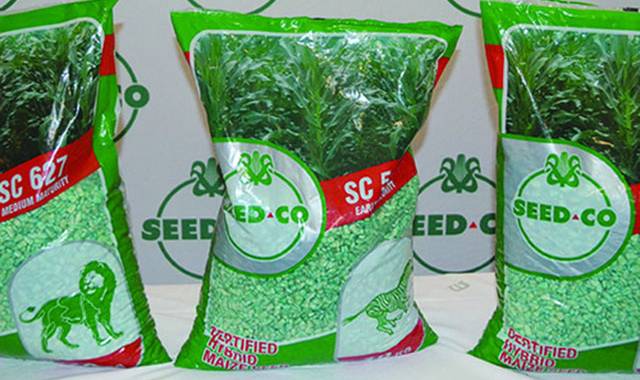 “…to spur regional productivity to levels of the US corn-belt and profit growth amidst climate change effects, three new medium maturing maize hybrids were registered,” he said.

Nzwere noted that the new varieties would complement the seed company’s other hybrid varieties to form a series of harsh-climate friendly products which thrive under stressful conditions.

“These are meant to complement short and long duration hybrid series in challenging environments.

The SC 657, the SC 659 and the SC 661, which are the new varieties, are set to help the pan-African company in its quest to defend its position as the top seed producer in the region.

The effects of climate change are being felt in various ways throughout both natural and human systems in sub-Saharan Africa.

Scientific climate change projections for the region point to a warming trend, particularly in the inland sub-tropics, frequent occurrence of extreme heat events, increasing aridity, and changes in rainfall — with a particularly pronounced decline in southern Africa and an increase in East Africa.

Last year, a good portion of farmers across the region had less than expected yields as a result of uneven rainfall patterns which have been blamed on climate change.

Scientists say the region could also experience as much as one metre of sea-level rise by the end of this century under a 4°C warming scenario.

Particularly, vulnerable to these climatic changes are the rain fed agricultural systems on which the livelihoods of a large proportion of the region’s population currently depend.

The latest development comes at a time when meteorological experts in southern Africa will be meeting in Zambia for the 22nd Southern African Climate Outlook Forum to prepare their early warning statement for the upcoming rainfall season.

Although there is some uncertainty in this forecast, poor rains will likely affect livelihood activities from October 2018 to January 2019, according to the Famine Early Warning Network Systems (Fewsnet).

“This year, there is a high chance for the development of El Nino phenomenon.

“The El Nino/La Nina impacts had devastated many countries across the region thus requiring country-level preparedness and response to the phenomenon,” said Southern African Development Community (Sadc) director for infrastructure Faka Nsadisa in an invite to stakeholders.

The 2015/2016 El Nino-induced drought left four million Zimbabweans in need of food aid with over 22 000 cattle succumbing to the drought.

“Recent extreme climate variations associated with El Nino which led to impacts to agriculture, water resource and hydropower power generation in several member States in Sadc region are still fresh in our memories.

“These climatic variations had resulted to adverse impacts on economic, social and environmental conditions in Sadc region,” Nsadisa said.