As Zimbabwe’s president preaches democratic reform in a country emerging from decades of repression, the scenes of soldiers dispersing opposition protesters after a disputed election have cast a shadow on promises of a new era.

Speaking to reporters after being declared the winner of the first vote since the fall of former mentor Robert Mugabe, a relaxed-looking President Emmerson Mnangagwa on Friday praised the “flowering of freedom.”

But some observers said Zimbabwe’s future depends on whether he can convince the military hardliners and former generals who make up his inner circle to share his vision.

After decades as Mugabe’s enforcer amid killings of thousands of people in Matabeleland in the 1980s, land seizures from white farmers and elections marred by violence, the 75-year-old Mnangagwa now faces what might be his biggest challenge: asserting control over the security apparatus that put him in office.

Jubilant Zimbabweans cheered the military in November when it rolled into the capital, Harare, and pressured Mugabe to resign after 37 years in power.

But when troops returned to the streets on Wednesday amid gunfire that left six people dead, there were no longer hugs, kisses and selfies. Residents fled, and when Mnangagwa’s election win was announced the reaction was subdued, not celebratory.

“We have removed Mugabe but not Mugabe-ism,” opposition leader Nelson Chamisa said.

Asked whether he was confident that the government and military support his claims of democracy, Mnangagwa said: “I cannot guarantee that everybody will share my vision. But I believe that the majority of my party members, as well as the generality of Zimbabweans, will share that vision.” 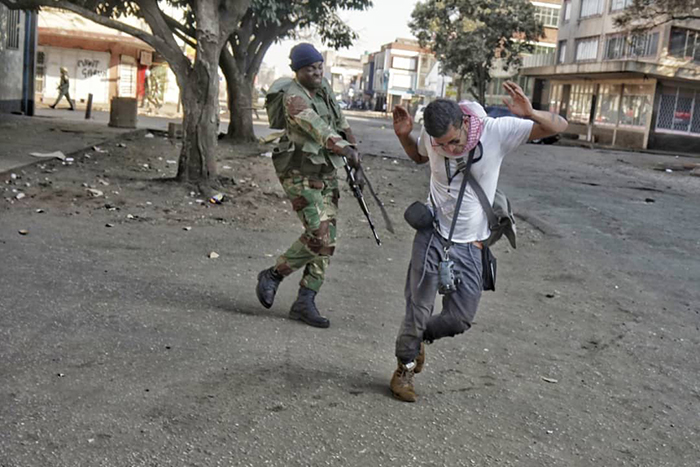 It was not immediately clear who ordered the military into the streets. Under Zimbabwe’s constitution only the president has the power to authorize the deployment of defense forces. Police have said they invited the military to step in under a law that says they can do so, but some Zimbabwean lawyers said the constitution remains supreme.

Mnangagwa has refused to say whether he knew in advance about the military’s deployment and has not publicly criticized its actions. While hearings began on Saturday for opposition supporters accused of inciting violence in Wednesday’s protests, there was no sign of action taken against soldiers. The president has said he will appoint a commission of inquiry once he is sworn in.

“How (Mnangagwa) manages the internal dynamics will have a strong bearing on how his democratic project pans out,” said political analyst Alexander Rusero in Harare. “Unelected power will define his path if he fails to take strong measures to impose his will on the military and others close to him.”

Zimbabwe’s military has a history of siding with the ruling party and was often been accused of deploying in rural areas to intimidate villagers into voting for Mugabe, according to Human Rights Watch. The opposition ahead of Monday’s peaceful election raised concerns that soldiers were applying that pressure again.

While Mugabe maintained control of the military for most of his rule, the military now appears to control Mnangagwa, said Dewa Mavhinga, the Human Rights Watch director for southern Africa.

“It appears the military is fully in charge” after Wednesday’s actions, Mavhinga told The Associated Press. “The one chance to press the reset button and make a clean break with the past has been lost following the actions of the military in the full glare of the international community.”

Unlike Mugabe, Mnangagwa has attempted to take a conciliatory tone in public and extend a hand to the opposition, mindful that the international community is watching closely while considering whether to lift sanctions and invest in the once-prosperous country.

While the president speaks of freedom of expression, however, the main opposition party accuses soldiers of detaining, assaulting and intimidating supporters in parts of the capital. Police raided the party’s headquarters on Thursday and arrested 18 people.

“Is he even in charge?” Gladys Hlatywayo, a political analyst in Harare, asked of Mnangagwa.” The military put him in power, he is answerable to them.”

Constantino Chiwenga, the general behind the military operation against Mugabe, is Mnangagwa’s deputy in the ruling party and was appointed a vice president. Another general who announced the operation on television, Sibusiso Moyo, is now foreign affairs minister.

The opposition has expressed concern about possible fissures in the establishment, including the military. While addressing the ruling party’s parliamentary candidates in March, Mnangagwa claimed that he was aware of an internal plot to impeach him after the elections.

“One theory is that there is a parallel authority headed by ambitious securocrats which have control of the security institutions,” said Alex Magaisa, a political analyst and law lecturer at Britain’s University of Kent. “That is the problem when power has been delivered to you by others. They own you. They see you as a placeholder, a puppet who has no need to be consulted.”

If Mnangagwa had to rely on the military to win the election he remains in its grasp, Magaisa said.

‘Time to think about protecting the vote in…

‘Time to think about protecting the vote in 2023’ – Sindile Ncube