The map below, which has not been disputed by any of the political parties, has shown that social media is still very irrelevant when it comes to determining election outcomes. 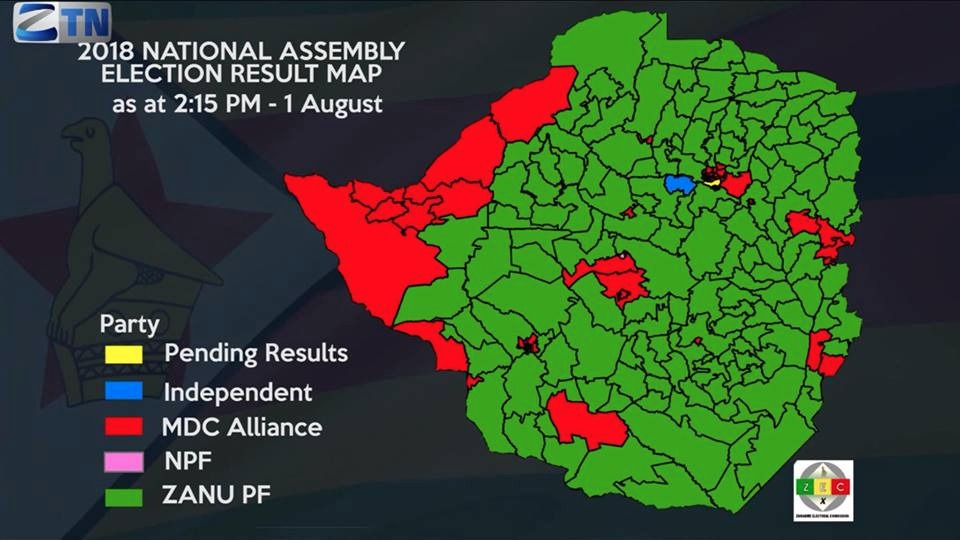 Absolutely irrelevant and overrated as I have always argued here!

Social media in elections will not be relevant in my view for at least a decade, depending on Internet connectivity speed in rural Zimbabwe.

So the comparisons of Emmanuel Macron to our very own young politicians, whilst attractive, they were ridiculously detached from the reality on the ground.

I warned Evan Mawarire and many others here, that whilst he was very popular on social media, in the ghettos of Harare and across the Zimbabwean urban metropolis, they didn’t even know who he was, many protested at my retort.

Well, that election map is our answer to that dispute of opinion.

MDC rules in towns and ZANUPF are the king of rural Zimbabwe.

Our voters both in the towns and rural areas don’t vote for ideas but for political parties that deliver on their needs or they vote against parties that have failed to deliver for them.

If the electorate voted for ideas, people like Fadzayi Mahere would have won in Mt Pleasant. She lost against a guy who lived and worked in Malawi and yet she was born and still lives and works in Mt Pleasant.

I have often said that social media, especially twitter, is the most deceptive political messaging platform out there.

You have a huge silent majority which I spoke about on Saturday which is not on twitter and a very vocal and yet bullying minority club, which loves to listen to it’s own voice on twitter. I call them the keyboard echo chamber warriors who have a view on anything and everything.

They constitute less than 15 percent of the voting population, they are a very insignificant minority in determining an election winner.

Then you have the millions of offline rural voters who haven’t heard of twitter and might never interface with it in their whole life.

They are more concerned about earning enough to take their kids to school and having a piece of land to farm and getting farming implements through command agriculture.

Today’s so called urban elites are a product of this lot, we all somehow came from the village but we became disconnected with it.

The rural folk see their little success as a direct result of the very same programs still in play today that many of us refuse to look at and if we do, we ridicule them.

Food for work is as old as Zimbabwe is, 38 years old so are the farming implements programs.

The idea that someone would vote for a political party in exchange for a bag of maize mean very little to us in terms of logic, but as Bob Marley said, who feels it knows it.

I always quote my homeboy Professor Bruce Mutsvairo on this issue, he told me two years ago that if you are interested in winning elections in Arica, switch off the phone and go to the grassroots.
Talk with the people, don’t talk to them.

Bruce is one of the leading social media and journalism scholars in Sub-Saharan Africa, he lectures in Australia and I recommend his books on social media.
They are indeed a ray of light for those wanting to understand social media political messaging.

I hope that the political actors have finally learnt not to be misled by superfluous rambling packaged as expertise, a lot of copy that flowed from all corners of the globe has turned out to be meaningless.

Academics, analysts and journalists also have lessons to learn from this election.

We have been taught that talking to 2500 people and thinking that you have an election result doesn’t exactly work anymore, more so in Zimbabwe.

In fact, the election prediction industry based on sampling a thousand people has been in serious disarray lately. Predictions are being knocked off by sucker punches.

This election also taught us that writing and at times rambling towards your very own desired outcomes is not necessarily political analysis.

It should come under party political news lettering, many of us were caught out predicting nonsense motivated by our hatred for either side.

So many of us were misled by a bunch of so called experts on Zimbabwe regarding the opposition’s penetration into rural areas.
We were told about the unprecedented rallies and the opening of space.

The opposition should have listened to Jonathan Moyo when he said, rallies are not structures.

There are many, varied and yet very simple factors why ZANUPF takes rural Zimbabwe at elections.

This is not rocket science at all. I have argued here that the ZANUPF 2018 election campaign started in August of 2013, when rural folk started receiving maize and rice every two weeks.

In other words, ZANUPF never leaves the rural folk, it remains there, rooted with the voters giving them a little of this and a little of that.

This symbiotic relationship was born out of the liberation struggle. ZANLA won the war using the rural areas, it understands the importance of rural folk in Africa.

So it is either the experts were lazy or they are dishonest or they have been using the wrong tools to look at how the political play was in motion.

This is not only Zimbabwe specific, it is a big problem across the continent. There is a huge rural urban disconnect, so attributing ZANUPF’s wins to rigging is lazy thinking.

ZANUPF has an added advantage of incumbency that allows it to dish freebies, abuse state media and control food programs. If that is the rigging we are talking about, then yes that happens.

The thought industry must introspect, my personal view is that it has been embedded with the opposition for too long and that relationship blinkers it from seeing other elements of the story.

Many of our scholars are products of their times and invariably they are partisan as we all are when it comes to politics.

Some are victims of rejection from ZANUPF and are fighting personal battles that have been conflated with the national question.

That is ok, as long as we know what motivates certain perspectives. We need NEW scholars, journalists and development experts with fresh ideas and voices.

We of the old have failed to separate the issues from our personal agendas and desired outcomes.

I want to read new material from young and honest scholars and less from the dinosaurs whose papers have become as predictable as their hypocrisy. Young scholars and journalists are needed as much as the new government will need new ideas and new brooms.

Hopewell Chin’ono is an award winning Zimbabwean international Journalist and Documentary Filmmaker.  He is a Harvard University Nieman Fellow and a CNN African Journalist of the year.
He is also a Fellow at the University of Oxford’s Africa leadership Institute. Hopewell has a new documentary film looking at mental illness in Zimbabwe called State of Mind. Hopewell can be contacted at [email protected] or on twitter @daddyhope

Hopewell Chin’ono: What are Political Reforms and why are they important for Zimbabwe

Coronavirus: What the world can learn from Ebola fight