Opposition supporters have stormed a police camp in Zimbabwe where officers were voting ahead of this month’s historic election without election officials present. 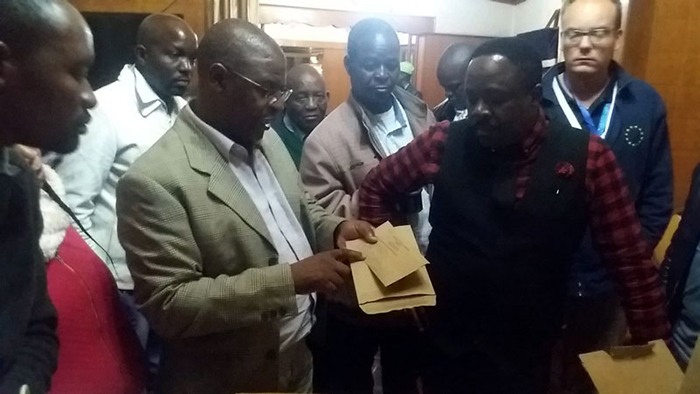 The chaotic scenes circulating on social media have alarmed some in a country whose new president has pledged to break with the past of elections marked by allegations of fraud and violence.

Police and soldiers who will be on duty during the July 30 election are allowed to vote earlier, but the process has faced vote-rigging allegations, with officers allegedly forced to support the ruling party while commanders watch. And Zimbabwe’s elections schedule says the early voting should take place July 22.

The election is the first after longtime leader Robert Mugabe stepped down late last year. New President Emmerson Mnangagwa, a longtime Mugabe ally, has vowed to hold a free and fair election and invited Western election observers for the first time in nearly two decades as he seeks to get international sanctions lifted.

“No member or officer was ever coerced to vote in front of any officer,” the commander of the police elections unit, Erasmus Makodza, said Friday of Thursday’s voting at the police post in Bulawayo.

The opposition, however, said police officers uncomfortable with the voting sent alerts via social media, resulting in officials and election observers rushing to the camp to find the process underway.

“What we witnessed is far from what is inscribed in the law,” said Welshman Ncube, spokesman for the main MDC opposition coalition. “People voting by postal ballot are not supposed to vote under supervision. They should simply get their sealed envelopes with their ballot papers and return them before a prescribed date. This was an attempt to rig.”

The election commission chairwoman, Priscilla Chigumba, said Friday that allegations of the voting as described on social media were “regrettable.” The commission is not obligated to set up polling stations for early voting and observers have no role in the process, she said.

Images of the voting posted on social media show chaos, with foreign and local election observers looking on as opposition officials sift through the boxes of votes placed in envelopes. One official records the incident on his mobile phone while providing commentary and mocking the voting process.

One video shows votes piled in cardboard boxes of a popular brand of sanitary pads.

“Here’s the irony — the brand is STAYFREE. This poll is anything but. The jokes write themselves,” journalist Mduduzi Mathuthu said on Twitter.

The secrecy of postal voting must be guaranteed – ZESN