South Africa’s A-listers showed the rest of the country how it is done when they came in all their splendour at the Vodacom Durban July. 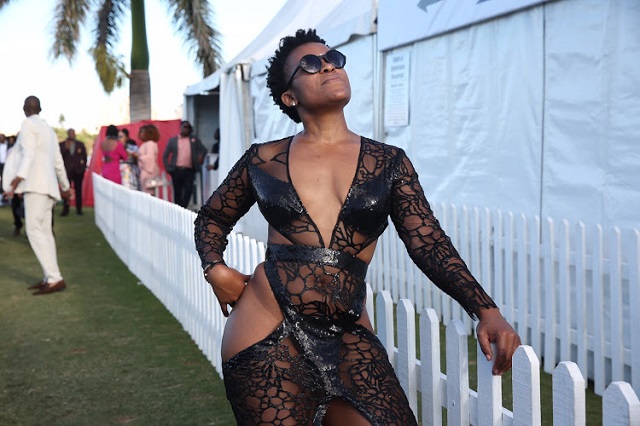 Nothing was left to the imagination when Zodwa Wabantu showed up. The dancer, once again, had every eye on her and she ate it up like a child in a candy store.

Zodwa is known for her hot body and her willingness to show it. Like last year, she made sure she was the focus of attention when she rocked up in the barely-there black sequence and lace floor-length, high-slit dress by Nonkosi Collection.

If anyone was wondering if she was safely concealed under the dress, the back of the dress told on her.

Meanwhile, in the latest in a string of bombings in Durban‚ explosive devices were planted and detonated on the fringes of the Vodacom Durban July on Saturday night.

This follows the bombing of Woolworth’s stores at the Gateway and Pavilion malls last week.

SA police spokeswoman Captain Nqobile Gwala confirmed that explosive devices had been detonated in and among parked cars on Gladys Mazibuko [Marriott] Road and Avondale Road – just a stone’s throw from the Greyville Racecourse and thousands of July revellers.

“At Marriott Road, just after 10PM, a device was found under a vehicle. No injuries were reported‚” she said.

“The second incident took place at Avondale and Milner road after 11PM after an unknown device exploded on a vehicle. The explosives unit members went to the scene to investigate what type of devices were used. Investigations are still continuing‚” she added.

Last Thursday two similar devices‚ one planted in the Gateway outlet and the other in the Pavilion‚ were detonated‚ causing fires.

“The Gateway outlet was evacuated on Saturday when a pipe bomb was found and later defused by bomb technicians.- online

Prudence Mabhena still has the voice!