The story of identical twin brothers, Tendai and Farai Katonha, has set tongues wagging in Chitungwiza. The two are prosecutors at Chitungwiza Magistrates’ Court. 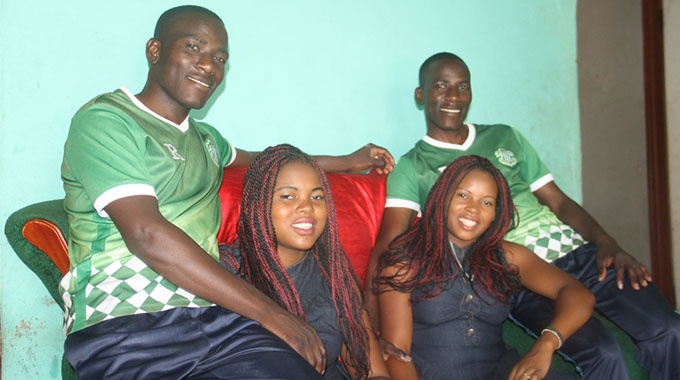 Born on August 31 1984, the identical twins were raised at Chikomo Village in Mudzi by their parents – Mr Major Katonha and Josephine Kachere.

Their father had three wives and during the time Tendai and Farai were born, all the wives delivered twins.

Growing up, distinguishing the two was always difficult as they looked exactly the same.

During their school days, Tendai and Farai always got into trouble for the mischiefs of the other.

“I remember we used to be punished together if one of us had committed an offence because it was difficult for them to know who between the two of us had been mischievous,” said Tendai.

It has proven to be almost impossible to separate them. Their parents tried but failed.

“From birth we have always stayed together all the time. I remember our father once attempted to separate us when we were in Grade One but he was unsuccessful,” recalls Tendai.

“I remained at Chimango Primary whilst Farai was taken to Nyamuzowe Primary in Mutoko.

“Because of that separation both of us would get sick and get hospitalised at the same time so much so that it disturbed our education.”

The boys were reunited when they got to Grade 5. From that time they never had any “mysterious” sicknesses.

Tendai and Farai’s performance was the same in school. They got the same results in their Grade Seven, O-Level and A-Level examinations.

“We both had seven units at Grade 7 and at O-Level for eight subjects we almost had the same grades.

“We took the same combination (of subjects) at A-Level – Management of Business (MOB), Accounting and Geography and we both had 12 points,” said Farai.

The bond was extremely exceptional that the two would sometime fall in love with the same girl, something that made them decide to date twins to avoid a clash of interests.

“During our high school days, there were incidences when we would fall in love with the same girl because our interests and mindset are the same,” says Farai with a chuckle.

“To the girls, it was a dilemma. They wouldn’t tell who was who and chances were high that one girl could date two boys without realising it.”

The sets of twins fell in love, went on a double date with Nivette and Yvette Neshamba.

Sensing they had hit the jackpot, they got engaged and walked down the aisle in a joint ceremony in May 2014.

Tendai is married to Nivette Tinenyasha Neshamba and the couple has a three-year-old baby girl whom they named Munenyasha while Farai is hubby to Yvette Nyasha. They were blessed with a baby boy called Wenyasha, who is also three-years-old.

Currently, both wives are pregnant.

According to statistics compiled by the International Human and Marital Rights Organisation (IHMRO), 70 percent of marriages between twins and non-twins collapse in a space of three years from the date of nuptials.

This, therefore, makes it more sensible for twins to seek the hand of other twins in marriage.

Farai narrates how they met their wives.

“One day at a youth conference, I met a girl whom I liked and we exchanged numbers, so did Tendai but we were in different groups.

“After church that’s when we shared what had transpired during the day. That is when we both realised they had the same phone number,” he said.

Out of fear that they had fallen in love with the same girl, they called to verify, only to find out that the girls were also identical twins who used one handset.

Three weeks later they all officially met and that’s how their love story unfolded.

The couples believe that only death can separate them. They agreed that if one of the twins passes on prematurely the surviving twin automatically inherits the wife.

“We have realised that only death will separate us. And when that happens one of us will automatically become husband to both wives,” said Tendai.

“It will be difficult for one of us to move on with a new life partner.”

Their wives, though they never attended the same class, have an equally strong relationship such that they cannot live without the other.

In Grade 7, unlike their husbands, Nivette had 18 units while Yvette got 15 units. However, in their O-Level exams, the twin sisters passed in only three subjects.

Their wives said although their husbands looked the same, they had a way of distinguishing between them.

But for their kids it’s a dilemma.

“Of course, our husbands are very identical but we have our own special way of differentiating between them. Unfortunately for our kids the story is different; they call both ‘Daddy’ and they do not know who exactly their father is,” said Nvette.

The wives said being married to identical twins had several advantages for them.

“We are happy to be married to our twin husbands because we always do things together.

“Even sometimes when one of us needs counsel we help each other as couples and whenever we want to visit our in-laws we do so at the same time,” they said.

The twin wives and their husbands have made it their lifestyle to always dress the same every day.

“That is our culture, we wear the same clothes, shoes, colours and spot the same hairstyles,” said Nivette.

Tendai and Farai graduated with degrees in International Law, Public Governance and Politics from Monash University in South Africa.

They work as prosecutors at Chitungwiza Magistrates’ Courts.

The bond between twins is undeniably strong and unlike any other sibling connection.

Health experts say it begins in the womb and often lasts a lifetime.

And, this love story may have people seeing double: two identical brothers married to twin sisters, living under the same roof and very soon expecting new babies, and, who knows, identical twins perhaps? The Herald