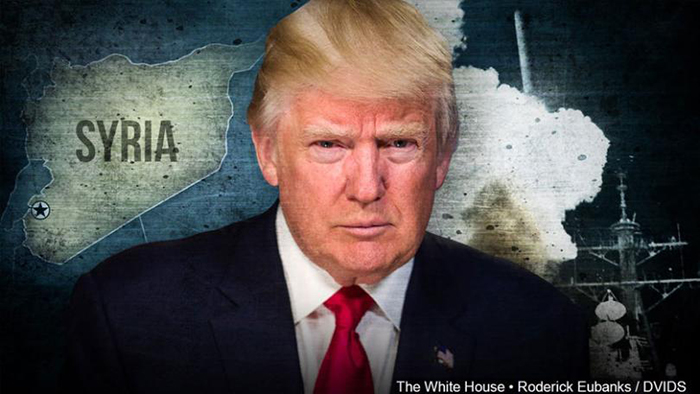 The US says “all options are on the table” in response to a suspected chemical weapons attack in Syria, as Western leaders continue to weigh up military action. White House spokeswoman Sarah Sanders told reporters that a final decision on military strikes had not been taken.

But she said the US holds Russia and Syria responsible for the incident.

The US National Security Council is to meet on Thursday, while UK PM Theresa May has called a cabinet meeting.

Activists, rescue workers and medics say dozens of people died in the rebel-held town of Douma on Saturday.

But President Bashar al-Assad’s government – which receives military backing from Russia – denies being behind any chemical attack.

“The president has a number of options at his disposal and a number remain on the table,” Ms Sanders said during a briefing on Wednesday evening.

“We haven’t laid out any specific actions we plan to take,” she added.

The comments appear to row back on President Donald Trump’s earlier warning to Russia that it should “get ready” for missile strikes in Syria.

“Get ready Russia, because they will be coming, nice and new and ‘smart!'” Mr Trump said in an early morning tweet on Wednesday.

He also called the Syrian leader a “gas killing animal”.

The US, UK and France have agreed to work together and are believed to be preparing for a military strike in response to the alleged chemical attack last Saturday.

Defence Secretary James Mattis said the US was still assessing the chemical attack, but added that the military stood ready “to provide military options if they are appropriate as the president determines”.

The White House said the president had not laid down a specific timetable for when military strikes may take place. But a senior source has told the BBC’s North America editor Jon Sopel that any military action is likely to happen at the weekend.

A US Navy guided-missile destroyer, the USS Donald Cook, is in the Mediterranean Sea.

In the UK, sources told the BBC that Prime Minister Theresa May looked ready to join military action in Syria without seeking parliamentary consent first, as she is understood to be reluctant to ask the US to hold off any action while she consults MPs.

French President Emmanuel Macron will reportedly decide on a response in the coming days.

He has said any strikes would target the Syrian government’s “chemical capabilities”.Other key figures have been showing signs that they anticipate strikes to happen soon.

Senior US military sources say President Assad’s forces have already moved some aircraft in an attempt to protect them from attacks.

The New York Times reports Syrian planes have been taken to a Russian base near Latakia on the country’s coast, and that some Russian personnel and equipment have also been moved.

Airlines have also taken note of the situation, and no planes are visible over Syria on the commercial flight-tracking website FlightRadar24.

Meanwhile, UN Secretary General Antonio Guterres has warned of the need to avoid the situation “spiralling out of control”.

What happened in Douma?
Opposition activists and rescuers say government aircraft dropped bombs filled with toxic chemicals on the town, the last major rebel stronghold near the capital Damascus.

Media captionUnverified video shows children being treated after the alleged gas attack
The Syrian-American Medical Society (Sams), which operates in rebel-held areas, and local aid workers said more than 500 people had been treated for symptoms “indicative of exposure to a chemical agent”.

On Wednesday, the UN’s World Health Organization demanded access to verify reports from its partners, which include Sams, that 70 people had died – including 43 who showed “symptoms consistent with exposure to highly toxic chemicals”.

A team from the Organisation for the Prohibition of Chemical Weapons (OPCW) is due to deploy to Syria “shortly” to determine whether banned weapons were used.

Douma was under renewed assault from Syrian and Russian forces last week.

Rebels have now been evacuating the town under an agreement involving the Russian military.

What is Russia’s position?
It has described the reports of the chemical attack as a “provocation” designed to justify Western intervention against its ally.

Media captionThe US president has said “nothing’s off the table” – so what options are on the table?
It said on Wednesday that samples taken from the site had not revealed any chemical substances.

Senior Russian figures have warned of a Russian response to a US attack.

On Wednesday Alexander Zasypkin, Moscow’s ambassador to Lebanon, repeated a warning by the head of the military that missiles would be shot down and their launch sites targeted if they threatened the lives of Russian personnel.

Also on Wednesday, Russian foreign ministry spokeswoman Maria Zakharova asked whether the aim of Western strikes might be “to quickly remove the traces of the provocation… [so] international inspectors will have nothing to look for in terms of evidence”.

Addressing new ambassadors in Moscow, President Vladimir Putin said he hoped common sense would prevail and that the situation would stabilise.

Mr Putin said Russia would “keep all its international obligations in full”. BBC