Mawere confronts Ginimbi on Twitter: “If you paid me what you owe me it would be a great idea to boast”

A few minutes after flamboyant socialite and businessman Genius “Ginimbi” Kadungure boasted about buying a Bentley on Twitter, South Africa based Zimbabwean businessman Mutumwa Mawere dressed him down on the micro-blogging site, telling him to first pay over R340 000 that he owes him.

Responding to jibes from other people on Twitter about his “poor English” Ginimbi wrote; “Do you agree that talk is cheap, criticism is easy, but being succesful (sic) is difficult? If you do not agree, try go buy a bently (sic) even an old one, with fluent english. #BentlyBentyaga2017″“. 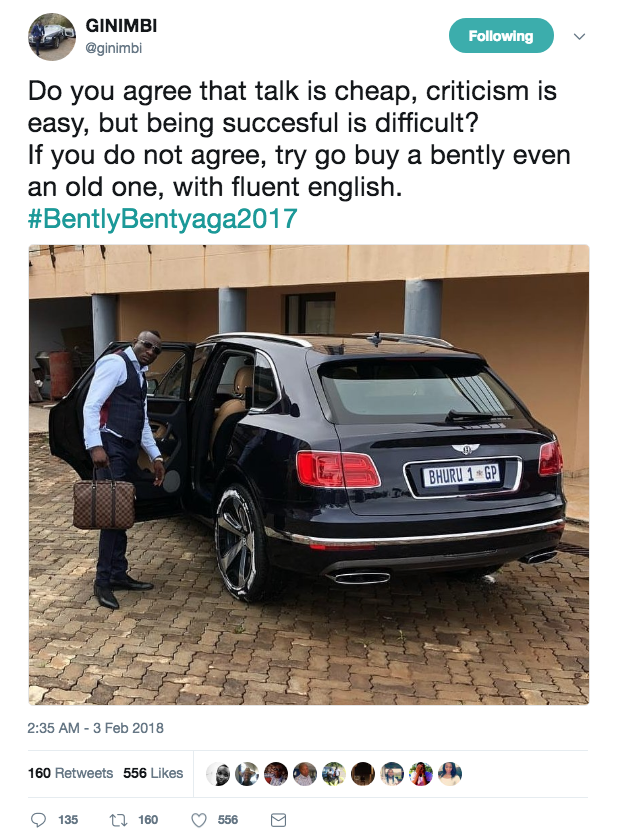 Mawere then seized on the post to write: “If you paid me what you owe me it would be a great idea to boast.” 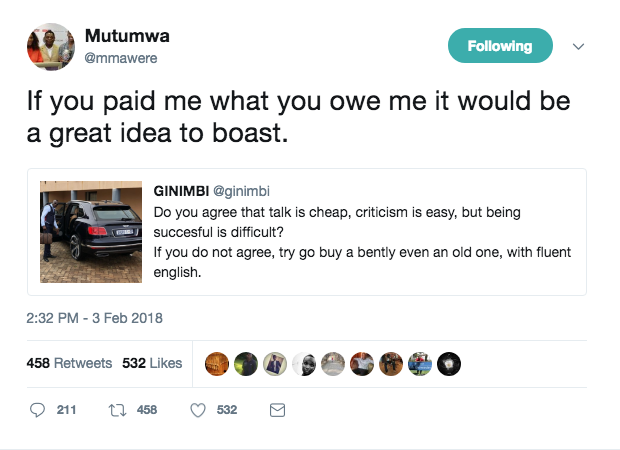 “With all due respect Mawere, this is not the right platform to adress (sic) such an issue, why now, why here? I do NOT owe you ANYTHING, if I owe you, institute legal proceedings. Welcome to the band wagon of people fabricating FAKE stories trying to shoot my hard work down!”

In a another post on Sunday, Ginimbi sought to explain his earlier boast saying:

“It may sound corky & pompous 2 say try buy #BENTLEY Bentayga with fluent english, but i was responding to so many trolls & cyber bullying here, in reference to my english. Financial Intelligence > Fluent English. While others focus on fluent english i focus on the MONEY language!”

Nehanda Radio sought comment from Mawere to get the full details behind the deal that turned sour. He told us that Ginimbi had approached him in 2013, needing advice and help buying gas from a company called Reatile Gas through his company Pioneer Gas registered in Zimbabwe.

“At the time, he represented that he had deposited funds to the order of Reatile but the funds had not cleared which meant that his trucks could not load the product for dispatch to Zimbabwe. This created redundancy in the system. After hearing the problem, I asked him to arrange a meeting with representatives of Reatile to see if they could provide the product on the back of my guarantee.

“We then met the representatives of Realtile who said that their policy was cash before product release especially because Pioneer was a Zim domiciled company. We could not resolve the immediate problem that Genius was facing and I asked him how much gross profit he was making per cycle and he said 40%.

“I then asked him whether it was ok for me to pay for the product and share the profits from the sales in Zim of the product. We agreed on that and although he said that he said that Pioneer did 4 cycles per month or 160%, we agreed that he would pay me 15% per month.

“I then proceeded to pay for the product. I did not expect that he would convert the proceeds from the gas sales into his own use without my knowledge and consent.

“After one month stories began to change. He said that he had bought a gas business in Botswana that was causing him headaches and wanted to sell it first so that he could give me back my money with the arrears. He then sold the business but has been ducking and diving,” Mawere told Nehanda Radio.

AKA on dating: My life isn’t going to stand still