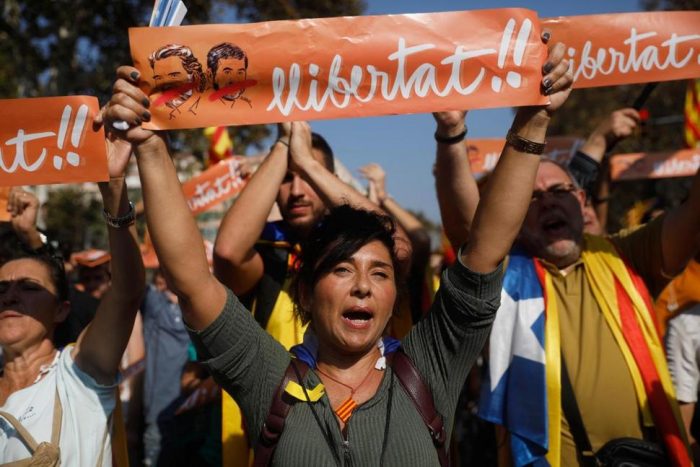 Catalan MPs backed the motion 70-10 in a ballot boycotted by the opposition.

The crisis began when Catalans backed independence in a disputed vote earlier this month.

The Catalan government said that of the 43% of potential voters who took part in the referendum, 90% were in favour of independence. But Spain’s Constitutional Court had ruled the vote illegal.

What happened in the Catalan parliament?

The debate came after Catalan President Carles Puigdemont on Thursday opted against declaring independence or calling early elections, instead calling on MPs to decide.

A motion declaring independence was approved with 70 in favour, 10 against, and two abstentions in the 135-seat chamber.

The measure calls for the transfer of legal powers from Spain to an independent Catalonia.

But the Spanish Constitutional Court is likely to declare it illegal, and few in the international community will recognise Catalan statehood.

What will the Spanish government do next?

Soon after the vote at the regional parliament, the Senate – Spain’s upper house – made the unprecedented step of approving measures allowing the Spanish government to impose direct rule over Catalonia.

Mr Rajoy is now expected to hold a cabinet meeting and decide what measures to take.

It could include the firing of Catalan leaders, and the Spanish government taking control of the region’s finances, police and publicly owned media. BBC

Fati being considered for Spain selection