President Robert Mugabe announced a long-awaited reshuffle of his Cabinet last night and axed five ministers as he moved to freshen up his government. 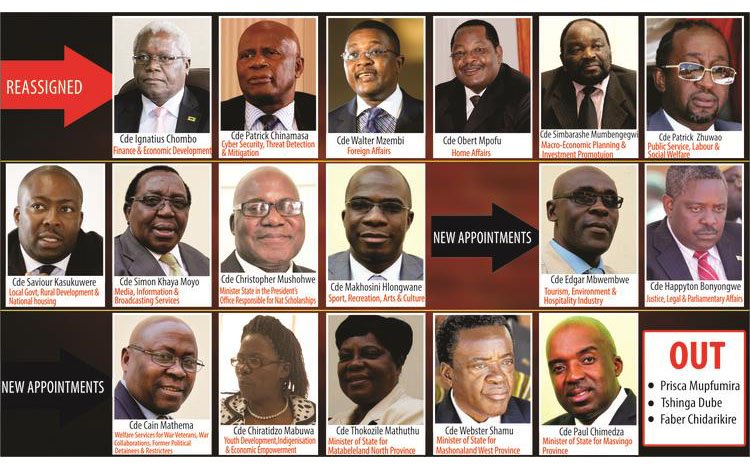 Mugabe, whose three decade-plus grip on power is being tested by an internal party challenge, announced a new line-up with changes at the top, dropping Emmerson Mnangagwa from the Justice, Legal and Parliamentary Affairs ministry, while cutting loose a number of lieutenants perceived as close to the embattled vice president.

Dropped from Cabinet are Priscah Mupfumira, Tshinga Dube, Abednico Ncube and Faber Chidarikire — all members of the so-called Team Lacoste.

The roots-and-branch shake-up comes after Mugabe accused unnamed senior officials of trying to push him into retiring and likened them to the biblical betrayer Judas Iscariot.

‘It is a Grace Mugabe reshuffle’

He will chair his new-look Cabinet meeting this morning.

The list includes Patrick Chinamasa, who is now responsible for a weird ministry called Cyber Security, Threat Detection and Mitigation.

Christopher Mushohwe now heads what should otherwise be a department. He is now the minister of State in the President’s Office Responsible for National Scholarships.

The transfer of Chinamasa to the obscure ministry of Cyber Security was the main talking point in the limited Cabinet reshuffle.

Chombo will take up Chinamasa’s position, the chief secretary in the Office of the President and Cabinet Misheck Sibanda said in a statement last night.

After removing the vice president from his Justice, Legal and Parliamentary Affairs position last night in a shock axing, Mnangagwa was replaced with Central Intelligence Organisation director-general Happyton Bonyongwe.

The changes basically decimated the key pillars that support Mnangagwa, leaving him hanging by a thread.

Mnangagwa, 75, enthroned vice-president in 2014, has headed off fierce opposition from Grace and the Generation 40 faction of the ruling party in recent weeks, with political temperatures heating up over claims that he had been hospitalised in August because he had been poisoned.

Mzembi, who is widely regarded as a future party leader and probably the biggest winner in the shuffle, takes on the key role of Foreign minister at a particularly challenging time, and at a time Zimbabwe and its former coloniser Britain have expressed readiness to open a new chapter of rapprochement.

Mzembi is being replaced by Edgar Mbwembwe in the Tourism and Hospitality Industry portfolio.

Mumbengegwi has been shunted to the Macro-Economic Planning and Investment Promotion ministry.

Makhosini Hlongwane remains the head of the now Sports, Recreation, Arts and Culture.

The opposition Movement for Democratic Change described the reshuffle as “a very big yawn.”

“Mugabe has totally and completely lost the plot. Actually, he should have reshuffled himself by immediately announcing his retirement.

“What kind of ministry has been created for Patrick Chinamasa? What type of nonsense is that? Chinamasa is now effectively on the same level as a WhatsApp group administrator.

“This is a very big joke that isn’t funny. The most effective reshuffle will come after next year’s elections when the entire Zanu PF dictatorship, warts and all, will be booted out of power.”

‘It is a Grace Mugabe reshuffle’