By Nehanda Radio On Jun 12, 2017 1,450
A high speed chase from Durban North in the direction of the city centre culminated in a shootout between a member of a security company and the occupants of a black Mercedes Benz on Sunday evening. 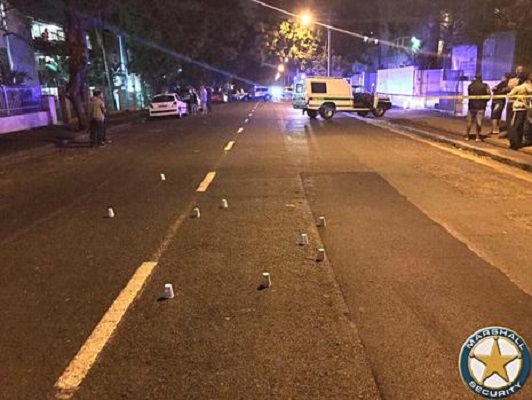 Marshall Security spokesperson Kyle van Reenen said their members were patrolling on Soofie Saheb Drive in Durban North at about 5.15pm when an armed reaction officer noticed a “suspicious vehicle” –  a black Mercedes-Benz – and began to follow the vehicle while relaying information to the emergency contact centre.
Van Reenen said the vehicle was confirmed to fit the registration and description of a vehicle wanted regarding several crimes in the greater Durban and surrounding areas of late.
Related Articles

Sep 3, 2013 161
“The driver noticed the reaction officer was following and increased speed in a reckless attempt to evade arrest,” said Van Reenen. “Travelling at high speed the vehicle fled in a southerly direction on Masabalala Yengwa (NMR) Avenue, with the Marshall Security armed reaction officer in pursuit.”
He said the vehicle turned up Smiso Nkwanyana (Goble) Road before turning into Percy Osborne Road where it came to a stop.
Two occupants of the Mercedes-Benz got out brandishing AK47 rifles, firing several shots at the reaction officer who took cover while returning fire, with several high caliber rounds striking his vehicle.
‘“The suspects fled in the vehicle towards Umgeni Road, while additional resources and members of the SAPS descended on the scene,” said Van Reenen.
He said despite an extensive search the suspects managed to evade arrest.
The Marshall Security officer was unharmed.
The scene was secured and handed over to the SAPS for further investigation and processing.  IOL