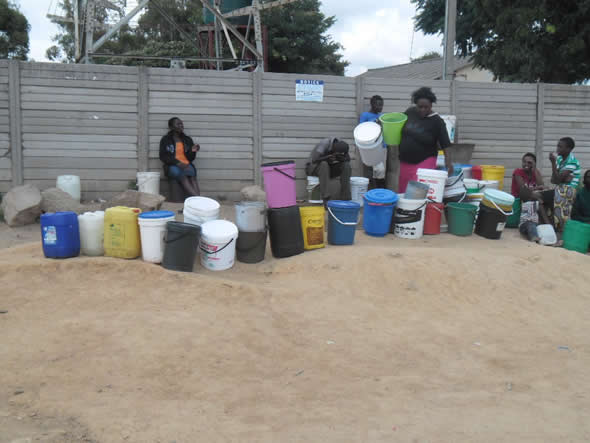 Water woes around most of Harare’s suburbs have resulted in the exploitation of residents who now have to pay to fetch water from government-drilled boreholes.

Most suburbs around Harare have been dry for a considerable time owing to the council’s failure to provide enough water purification chemicals, resulting in water rationing, with Kamfinsa, Budiriro, Mabvuku, Tafara, Msasa Park, Hatcliffe and Hatfield being the hardest-hit.

However, in a bid to alleviate the situation, government drilled boreholes around many of these suburbs, but some youths are now terrorising residents, asking them to pay for the water while they pocket the money.

Popularly known as “waterpreneurs”, the youths rough up mostly women and girls who patiently wait at boreholes for hours in agonising queues.

Residents in Mabvuku, Chitungwiza and recently Warren Park, claim they are being ripped off by gangs of youths who sell the borehole water.

“We are being ripped off at Warren Park Polyclinic, where the Unicef-drilled borehole is located.

“Each time we go to fetch water, there will be people demanding that we pay 25 cents for three 25-litre buckets.

“We have families and will have to fork out more than $2 every day for water, which is not sustainable considering that most residents are mere vendors who are struggling to make ends meet,” a woman who spoke on condition of anonymity told the Daily News yesterday.

She said initially they were told that the money being collected is being used to buy taps, but the issue has been going on since last year.

The residents are now questioning if the money for the so-called taps is not yet enough.

According to some sources, these money-spinning adventures now have a political dimension to it, as some youths take it as some form of empowerment, which they capitalise on to eke out a living.

This has also been the prevailing situation in Mabvuku, where youths have also been terrorising residents at boreholes.

These unruly youths jump queues and fill numerous containers, which they in turn sell to desperate residents.

The Daily News visited Mabvuku last year and witnessed women at a borehole near Kamunhu Shopping Centre being roughed up by the youths.

Mabvuku resident Phanuel Mbiri told the Daily News then that area D and old Mabvuku could go for two months without any municipal water.

He said he has often had to defend helpless women at boreholes because of these waterpreneurs. Daily News