Flamboyant businessman and socialite Tazvi Mhaka has come to the defence of former Big Brother Africa contestant Pokello Nare after she was roasted on social media for attending his yacht party in Cape Town, South Africa and “hanging out” with married men in the absence of her husband.

On Thursday morning UK based socialite Taka Chivore stirred a hornets nest when he posted;

“Zim folk vaye vanoti he’s my brother vaye vanoti she’s my sister we are just frenz just to let you know we know you are banging ukangonzwa vachiti frend frend kudii ziva ndivana team yekedero they just can’t declare their activities coz they belong to someone else takukuzivai.”

Pokello only saw the post on Friday and when she responded, it sparked a furious Facebook war with Chivore that generated over 8000 comments and sparked a social media frenzy.

Mhaka took to his Instagram on Monday defending Pokello and claiming that her husband, Ghanaian tailor Elikem Kurmodzie had also been invited to the party but had prior commitments in France.

“I choose to stick with my friends no matter what. I will be breaking the friendship code by sitting idle whilst morality, ethics and principles social media supervisors slander and throw people so special & invaluable to me in the muddy waters.these are my sisters and brothers by all means. it means nothing if you think otherwise.

“Firstly, my birthday party was organised by my friends as a surprise. As with such events, invitees are invariably drawn from friends and family. Pokello, Jacqueline and Ruvheneko are my sisters, and that will remain a fact, regardless of a penchant by some to arouse speculation.

“Secondly, Pokello’s husband was invited by organisers of the party. Regrettably, owing to prior business engagements in Paris, he could not attend much as he would have loved to. The attendance by his wife was with his full blessings.

“Finally, it is always prudent, if not courteous, to verify information before deploying defamatory statements and innuendo on social media and newspapers,” Mhaka wrote on his instagram.

Below are screenshots from Friday’s Facebook WAR starting with Pokello’s response to Taka; 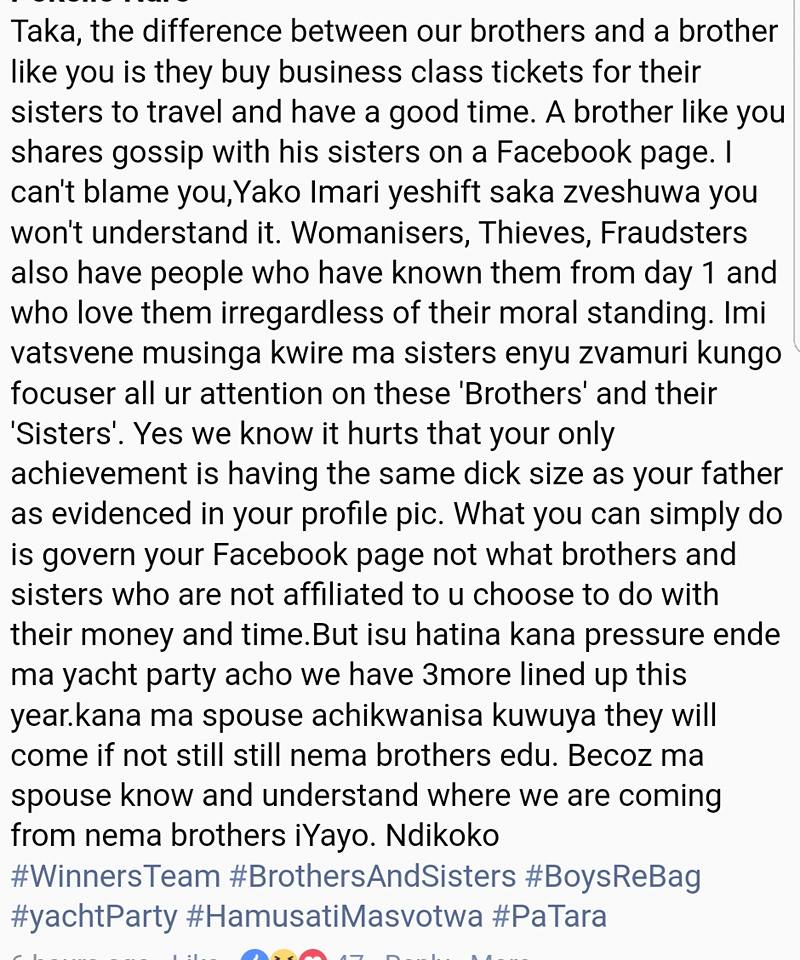 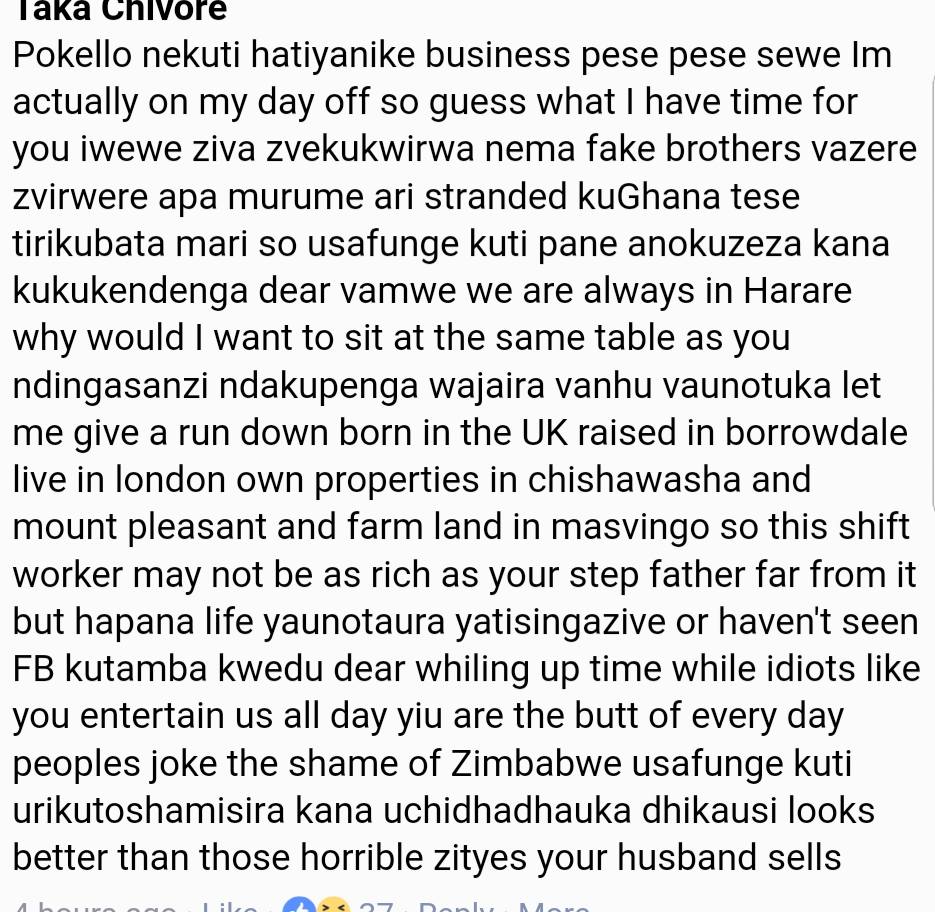 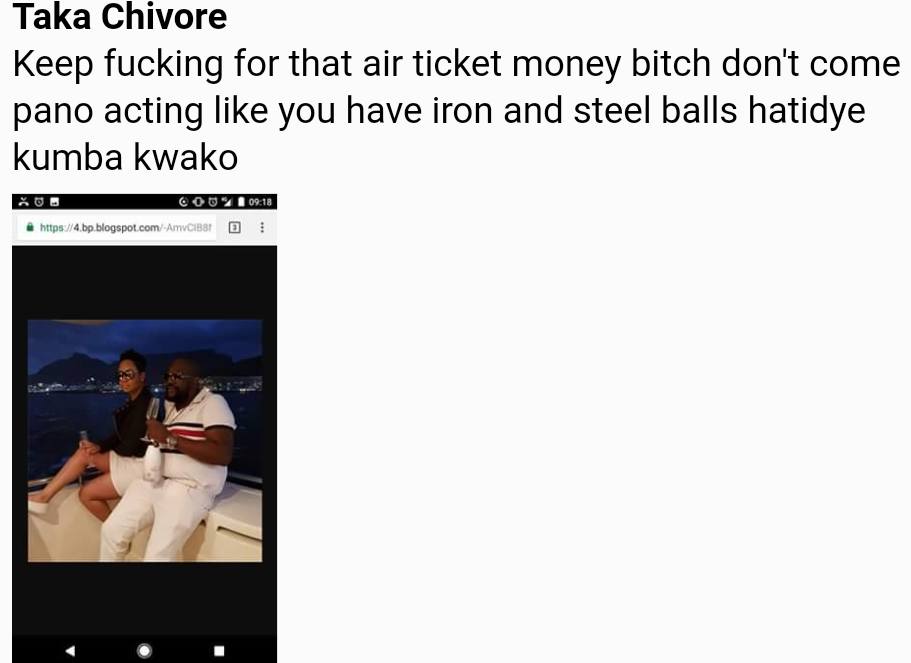 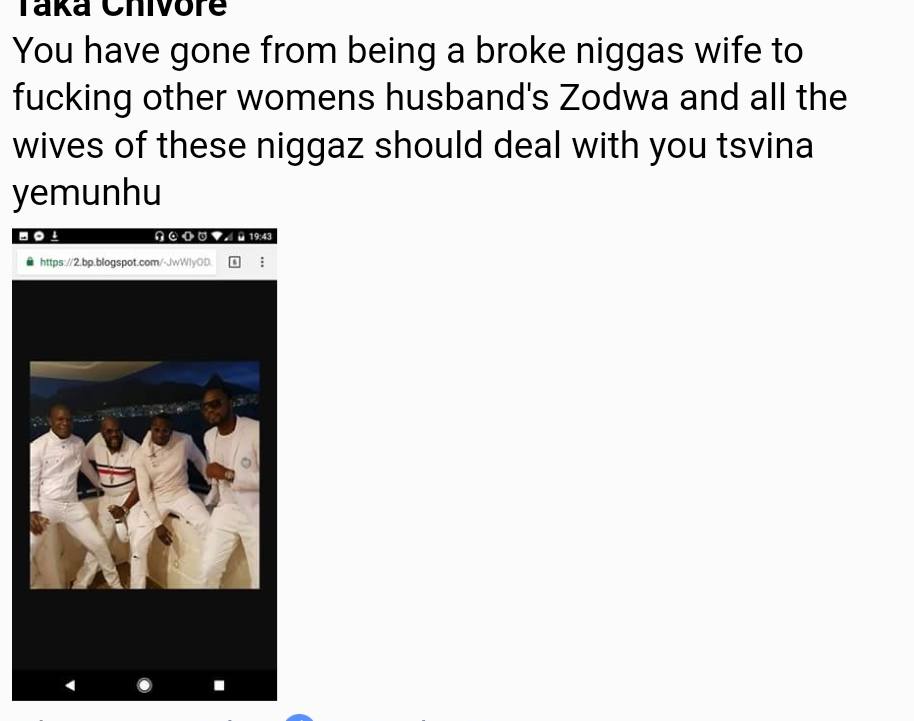 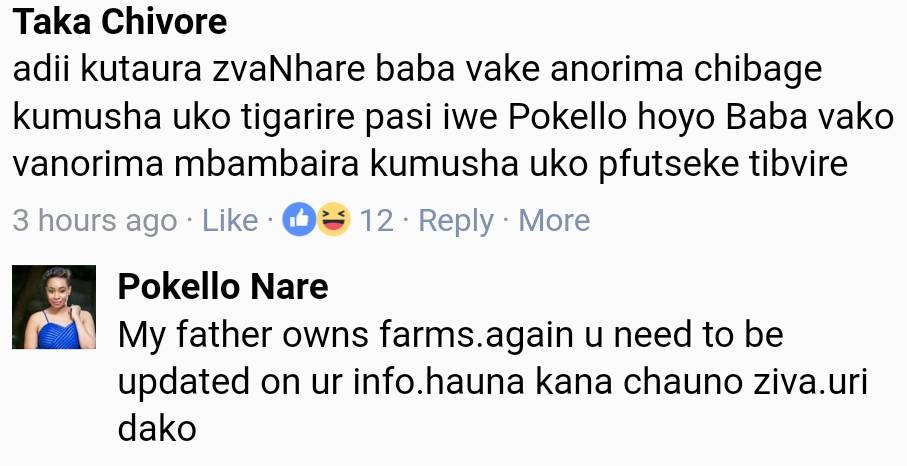 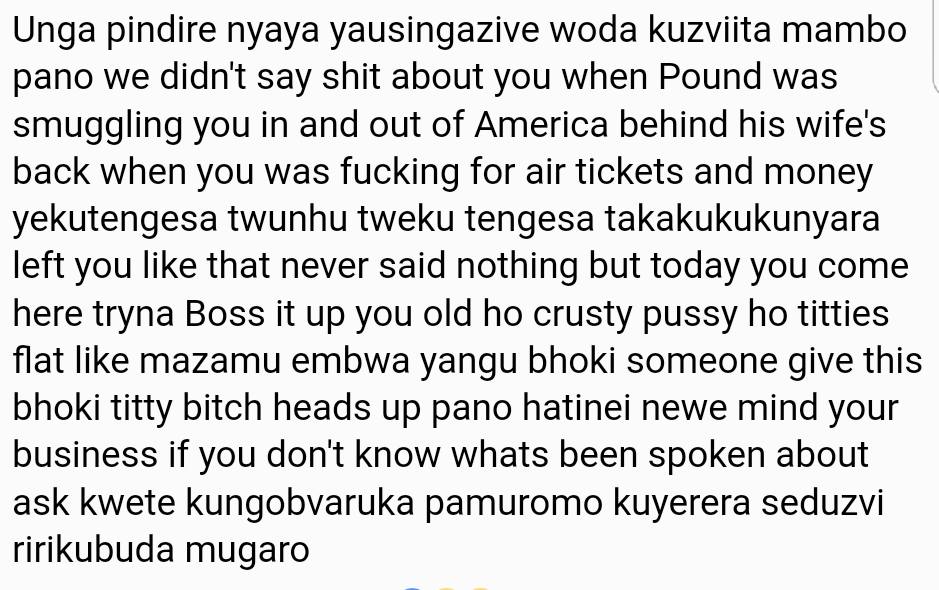 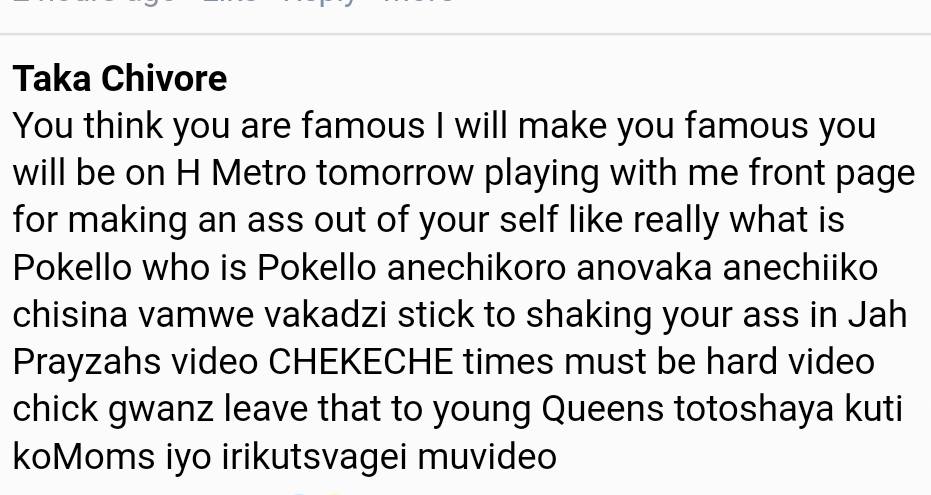 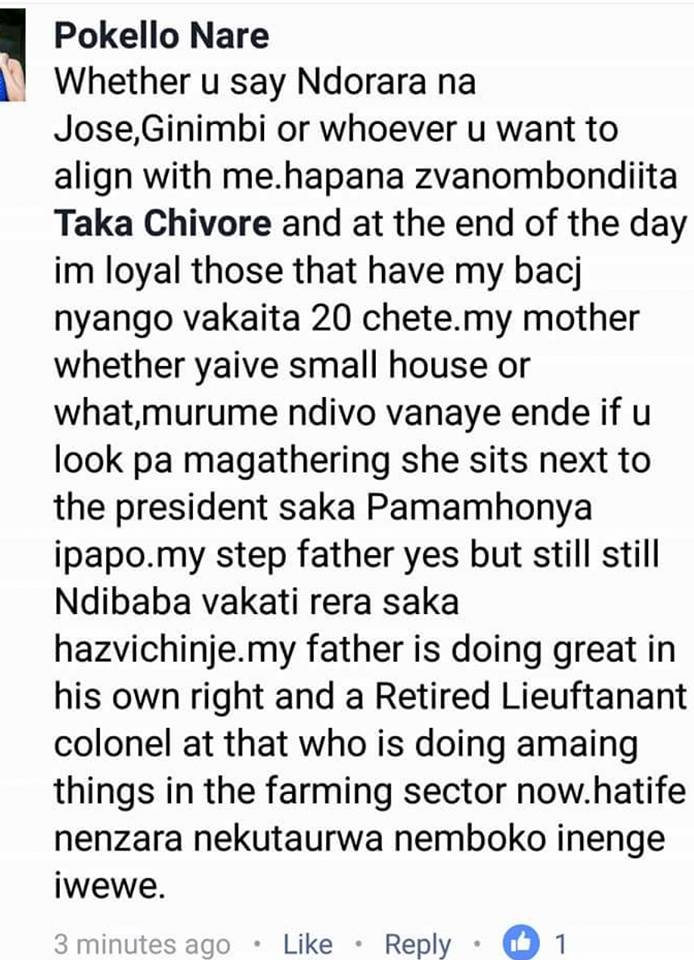 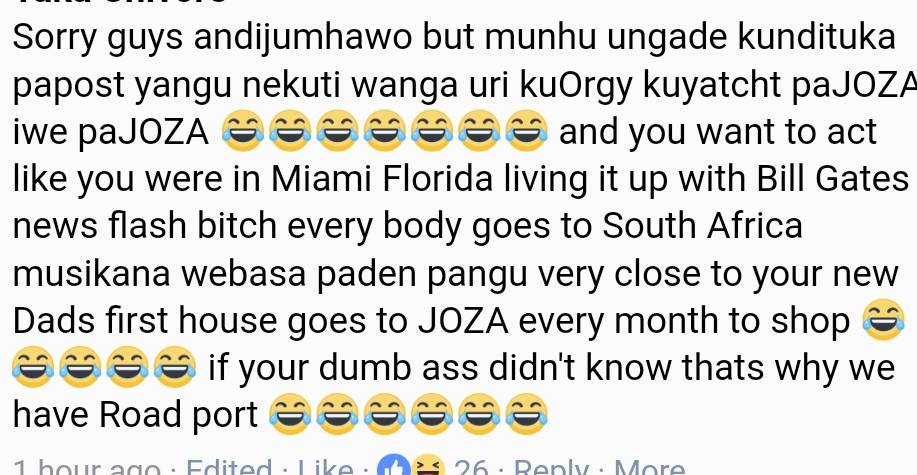 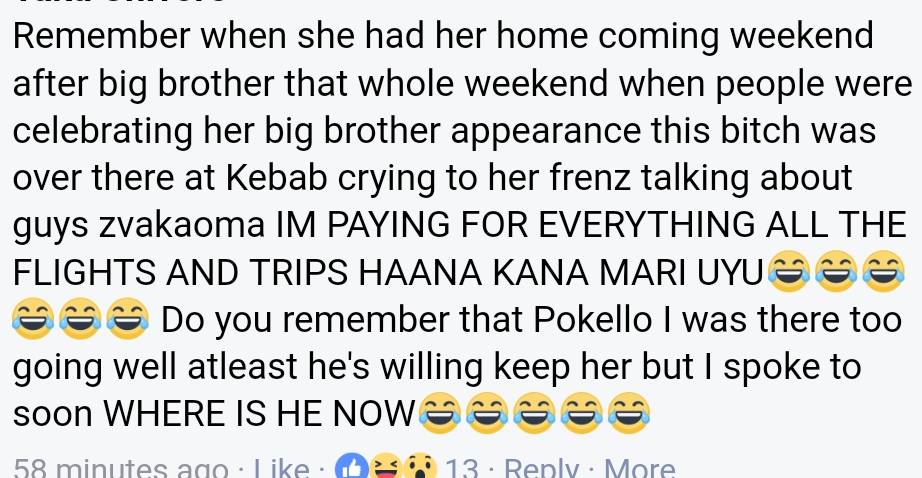