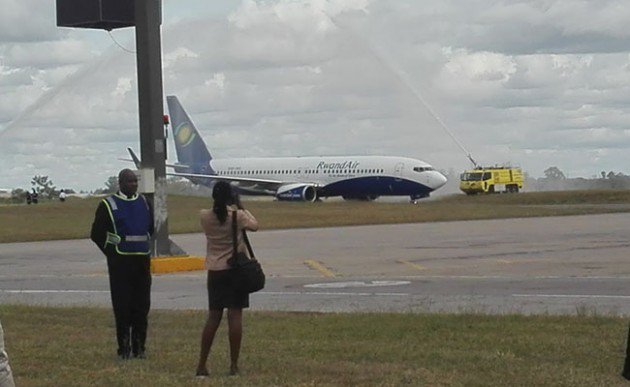 The airline will fly between Harare and Kigali via Lusaka four times a week on Mondays, Wednesdays, Thursdays and Saturdays.

RwandAir general manager Gobena Mikael who came on the inaugural flight said they were looking at increasing the frequency next month in order to offer day and night flights especially to passengers wishing to connect to other destination.

“To Harare we will fly four times a week but come end of May we will have three more flights in the night. Today’s flight, which is the day flight, will allow you to connect to Dubai, India and the Eastern region.

“The night flights will allow you to connect to London, West and Central Africa, so we are going to cater for all our Harare passengers,” he said.

Outrage over renaming airport after Mugabe

The Permanent Secretary for Transport and Infrastructure Development Munesushe Munodawafa said the coming in of RwandAir was a vote of confidence in the country.

“This signifies growing confidence in Zimbabwe as a destination of choice, shortly after the coming in of yet another African airline, Ethiopian Airline, into Victoria Falls.

“Route development is a vigorous and time consuming exercise. This country has been courting, RwandAir for the past 10 years culminating in this historic moment for us as a country,” he said.

He said that the establishment of the Harare-Kigali route was vital as it provides a link between the country and the Great Lakes region resulting in increased connectivity, flexibility and convenience to the traveling public into Central and West Africa, Europe and the Middle East.

In addition he said it reaffirms the two countries’ commitment to the aspiration expressed in Africa’s Agenda 2063.

“My ministry has engaged in the managed liberalisation of the air transport markets with the aim of enhancing destination connectivity for the benefit of travellers.

“This is indeed testimony to Zimbabwe’s commitment to the implementation of the Yamoussoukro Decision,” he said.

He urged RwandAir to consider code sharing arrangement or partnerships with other airlines particularly Air Zimbabwe as well as opening new routes in the country such as the Kigali-Victoria Falls route. Apart from the Boeing 737-800 the airline will also be using its Bombadier CRJ-900 on the route.

Since the beginning of the year Zimbabwe has been experiencing a lot of activity in the aviation industry with airlines expanding their routes while others have been introducing bigger equipment on existing routes particularly Victoria Falls.

Outrage over renaming airport after Mugabe