As the chartered Rainbow Airlines plane settled at the altitude the flight captain wanted, the lights were switched on and drinks began to be served to the CAPS United contingent. 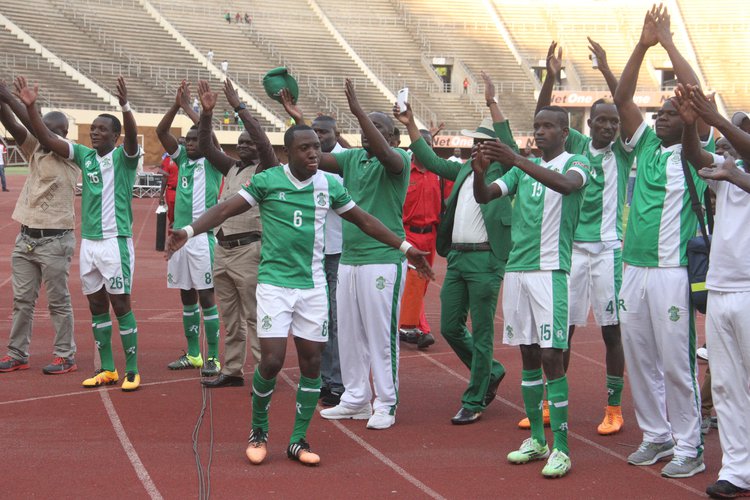 Whether by design or default, club president Farai Jere sat at the front alongside officials from NetOne.

Just behind them was a combination of the technical team and the media. The players all sat at the back.

As the air hostesses got to the men who had just held TP Mazembe to a 1-1 draw in a CAF Champions League first round, first leg clash, their mentor knew there was a question that needed to be answered.

“It’s okay lads you can have some beer, you deserve it,” said Lloyd Chitembwe as he got up from his seat and addressed skipper Moses Muchenje and his lieutenants.

The Makepekepe coach is a strict disciplinarian and his players know that pretty well and it took a while before the first beer order was placed.

Was Chitembwe testing them in their feel good hour? Gazes were exchanged between the players, but no one dared to make the first move, order the first ice cold can.

Chitembwe turned to the natural leader of the Makepekepe Class of 2017.

“Lenso (Leonard Tsipa) tell them it’s fine, the boys can have their drinks,” Chitembwe said as he slumped back to his seat amid an announcement from the flight deck that the plane was entering into Zambia.

And so it was, as the plane passed over a nation that was celebrating its national Under-20 side’s capture of the Africa Cup of Nations title, the Zimbabwean champions began toasting their gallant effort at the Stade TP Mazembe.

There had been no time for much celebration after the final whistle as Makepekepe needed to rush back to the airport where their chartered flight was ready to ferry them back home.

As the drinks flowed, Chitembwe shared with The Herald some intriguing aspects of his management style.

“They can enjoy this moment; they have just given me what I asked of them so a beer or two won’t hurt. They deserve it. As a coach when your boys give you what you have asked of them you have to tell them and allow them to savour the moment.

“However, there is a catch to it, Tuesday’s (today) workout will get every drop of beer out of their system. It will be back to serious business,” he said.

Makepekepe had to work twice as much for half as much at a highly-charged Stade TP Mazembe, a football stadium that is also being used to send some political messages.

Giant images of TP Mazembe owner Moise Katumbi were displayed at the stadium before the match.

Having arrived a few hours before the game, CAPS United badly needed to get a feel of the artificial turf, but their efforts were frustrated by overzealous TP Mazembe security personnel.

Going for warm-up was a hassle, assistant coach Mark Mathe was briefly denied access to the pitch and there were also efforts to bar Chitembwe from making his way to the bench.

“They said I didn’t have a tag that showed I was the head coach,” explained the CAPS United coach.

CAPS United jetted into the DRC expecting a tough time. And they got just that.

The mind games started the moment they arrived at the Lubumbashi Airport.

There were no TP Mazembe officials to welcome them, only the familiar figures of club chief executive Cuthbert Chitima and senior official Willard Manyengavana.

After resting and having lunch at the Lubumbashi hotel it was time for the Zimbabwean champions to make their way to the stadium for a game that had brought DRC’s second-largest city to a standstill.

But the head of the police escort team had some important message to deliver to Makepekepe president Farai Jere.

“Boss we need some motivation,” he said as he demanded some money for doing a job that DRC government pays him to do.

“You are a joke my friend,” Jere replied.

Grudgingly the escort team’s leader got his men and women into action.

As the convoy made its way to the stadium the TP Mazembe faithful signalled a massacre. It didn’t happen!

And, high above the clouds, Makepekepe enjoyed their exploits as they celebrated a draw that felt like a victory.

Very few had given them a chance in this match.

Or, as we flew back home, a chance for the players to be given the freedom to have a beer or two. The Herald

Disheartened Leeroy Mavunga opens up on failed move to Portugal