Thank you and goodbye 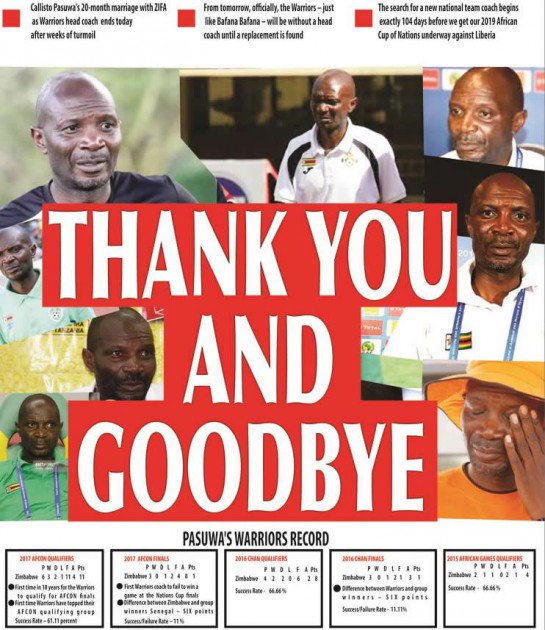 Callisto Pasuwa’s acrimonious divorce with ZIFA, after a rocky 20-month relationship that regularly flirted between the cordial and the toxic, will finally be sealed today with the two parties finally bringing down the curtains after weeks of a compelling drama that played out in the public gallery.

Although the 46-year-old gaffer, who ended the Warriors’ 10-year wait for a place at the Nations Cup finals, started working as the team’s head coach in May 2015, he only put pen to paper on an open-ended contract with ZIFA, subject to either renewal or termination at the end of the first year, in February last year.

The initial duration of the contract could be extended to a two-year period, depending on whether it was renewed at the end of the first year and, clearly, the deal didn’t specifically say that it would run for two years as had wrongly been suggested by a number of local media outlets.

“The contract shall be for the duration of up to two (2) years but shall have an initial period of one (1) year and shall be subject to renewal for an equivalent period in writing upon review of performance under this contract and subject to further negotiations by the parties,” reads part of the contract.

ZIFA president Philip Chiyangwa, just two months after taking over as the leader of domestic football, signed the deal on behalf of the Association while Pasuwa signed the contract which, officially, made him the Warriors’ head coach from February 1 last year even though he had staarted working eight months earlier.

The contract doesn’t specify that Pasuwa should qualify, at least, for the Nations Cup finals, as has also been wrongly suggested by a number of domestic media organisations, with the gaffer clearly not given any targets in the deal although the coach was guaranteed a $20 000 bonus payment for taking the Warriors to Africa’s biggest football showcase.

“The employee (Pasuwa) shall be paid a signing-on fee of fifteen thousand dollars (US$15 000) to be paid within three months of the signing of the contract,” reads the deal.

“Further, the employee shall be paid a gross salary of seven thousand dollars (US$7 000) subject to the statutory deductions of PAYE, NASSA and AIDS levy. This excludes winning bonuses and camping allowances.

“The salary shall be reviewed at the end of the first year of the contract in terms of Clause 2.1 above (this contract shall be for a duration of up to two (2) years but shall have an initial period of one (1) year and shall be subject to renewal for an equivalent period in writing upon review of performance under this contract and subject to further negotiations by the parties).

The two parties also agreed that termination of the contract would be on the following grounds: l At the end of the period of the contract l At any time upon the mutual agreement of the employer and employee in writing l On grounds of misconduct by the employee subject to disciplinary proceedings in terms of the Labour Act l Upon two months written notice by either party in terms of Section 12 (4) (b) of the Labour Act ZIFA exercised their rights not to extend Pasuwa’s contract by another year earlier this month after the Warriors crashed out at the group stages of the 2017 Nations Cup finals in Gabon where they picked a point from a possible nine points in another first round exit.

The ZIFA High Performance Committee recommended to their leadership not to renew Pasuwa’s contract by another year with the coach having thrown in the towel just a day after his team’s elimination in Gabon before seemingly being forced to change his decision.

The Association’s acting chief executive, Joseph Mamutse, officially advised Pasuwa that the contract would be terminated, with effect from today, freeing the country’s football controlling body to start their search for a new Warriors coach from tomorrow.

The acrimonious divorce has split the domestic football family with some rallying behind a coach who qualified for the finals of every senior tournament he competed in – the 2015 African Games, where the Warriors shocked Cameroon in the final qualifier, the 2016 CHAN finals and the 2017 Nations Cup finals.

That the Warriors had spent a decade wandering in the darkness of failure, especially when it comes to the Nations Cup with the country repeatedly stumbling in its quest to reach the finals since its last dance in Egypt in 2006, turned Pasuwa into a darling of millions of the team’s fans who also pointed out he had achieved all that operating in a tough working environment.

Midfielder Willard Katsande, who quit international football after captaining the Warriors in Gabon before a change of heart saw him reversing his decision and making himself available for one last dance with the team in the 2019 AFCON qualifiers, threw his support behind Pasuwa and asked ZIFA to reconsider their decision.

But there are others who also feel the coach repeatedly lost his way, when it came to playing at the finals where the boys are separated from the men, with his Warriors failing to win any of the six matches they played at the finals of the CHAN and Nations Cup under Pasuwa’s guidance.

The Warriors only picked a point at the 2016 CHAN finals, drawing their final group game after losing the first two, and they also picked just a point at the 2017 Nations Cup finals, losing two and drawing just one of their three games.

For ZIFA, the search for the man to lead the Warriors in the tough battle of qualifying for the 2019 Nations Cup finals, which get underway in June with a home date against Liberia in a group that features the Democratic Republic of Congo and Congo Brazzaville, begins tomorrow and it’s unlikely to be an easy task.

Former Warriors’ goalkeeper, Bruce Grobbelaar, who has been coaching in Canada, is the first coach to declare he is ready to fill Pasuwa’s shoes. The Herald