Rugare Gumbo: Fighter or rebel without cause? 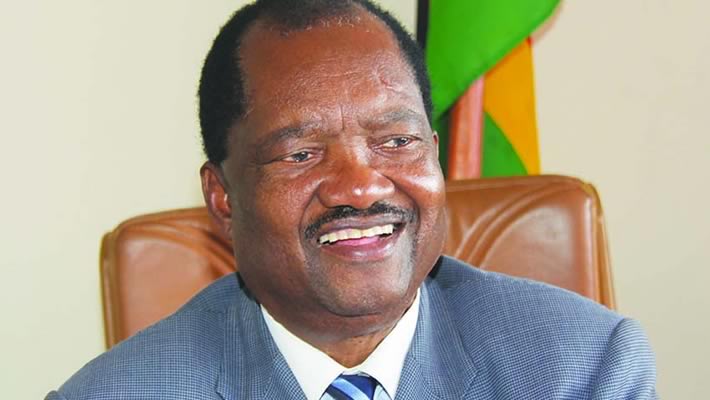 Loosely translated, his first name means peace, although his entire political life has been anything but peaceful.

Gumbo has had a political life punctuated by endless miseries and disappointments as he, at every turn, faced a series of arrests, suspensions, ridiculous electoral defeats and expulsions.

Last week, the seasoned politician was expelled from the Zimbabwe People First (ZPF) by its interim president, Joice Mujuru, whom, along with Didymus Mutasa, they had requested to lead the newly born party on an interim basis.

Coming two years after being ejected from ZANU-PF for hobnobbing with the same Mujuru, Gumbo’s latest predicament makes him a strong contender for a place in the Guinness Book of World Records as the most “harassed” politician the country has ever seen.

Born in Belingwe (now Mberengwa) district on February 8, 1940, Gumbo did his primary and secondary education in Masvingo, then Fort Victoria.

Historical records show that he started getting involved in active politics while staying in Masvingo, becoming a district chairman of ZAPU at the age of 22, in 1962.

As fate would have it, his entry into politics coincided with the enactment of the Law and Order Maintenance Act — a notorious law created by the Rhodesian government in its desperate attempt to douse the rising spirit of nationalism.

Gumbo’s crime was taking part in organising a general strike.

He was jailed for a few months, then flew to the United States on release.

He would spend the next decade pursuing university education in the US and Canada on bursaries before returning in 1973 to join the Zimbabwe African National Union (ZANU) in Zambia.

He easily distinguished himself as one of the few well-educated men to have joined the liberation struggle, popularly known as the Second Chimurenga.

His rise was meteoric, and so would be his fall a few years later.

He became secretary of information in the War Council (Dare ReChimurenga), ZANU’s external wing responsible for organising the war.

He worked under the chairmanship of Herbert Chitepo.

Two years after his return from the US, he was arrested and detained in March 1975 as one of the people who had been alleged to have taken part in the assassination of Chitepo.

He was imprisoned together with the likes of Simon Muzenda, Josiah Tongogara, Nathan Shamuyarira and Enos Nkala.

Like all ZANU nationalists, Gumbo then went to the newly independent Mozambique upon his release in late 1975.

This coincided with the release of many nationalists who had been serving lengthy prison sentences inside Zimbabwe, most notably Edgar Tekere and Robert Mugabe.

Meeting at Mgagao, Tanzania in 1976, members of the War Council declared President Mugabe their leader.

It would not be too long before trouble found Gumbo again.

In her book, Re-Living the Second Chimurenga — Memories from Zimbabwe’s Liberation Struggle, academic Fay Chung says Gumbo was arrested in 1976 after being involved in a botched coup attempt. There was great friction at the time between nationalists who were released from Zambia and those who were coming from Rhodesia.

Military men loyal to the Zambia group of nationalists expressed their discontentment by abducting Tekere and Herbert Ushewokunze.

They were led by a commander called Cletus Chigowe.

However, according to popular narratives, the coup was foiled by Rex Nhongo (the late army commander, Solomon Mujuru).

They spent close to a year in underground dungeons that served as their prison cells.
Chung describes this episode as part of the deadly conflicts between guerrillas of peasant background with little formal education, who joined the movement in the 1960s and early 1970s, and the better-educated, left-wing youths, like Gumbo, who flocked to ZANU in the mid-1970s.

She analyses the rivalry between the military leaders and the better-educated political leaders who feared their power.

Chung describes the brutal purges of ZANU’s left wing in the mid-1970s, as the movement’s leaders unsuccessfully negotiated for a neo-colonial solution to the liberation struggle, showing how ZANU moved to the right as racism and tribalism were wielded as weapons against internal political enemies.

War veterans’ leader, Chris Mutsvangwa, himself now confined to the political wilderness after clashing with authorities in ZANU-PF, once claimed Gumbo was arrested for “trying to depose the party’s president during the liberation war”.

With Gumbo and his group having remained in prison until independence in 1980, memoirs from him will undeniably be a best seller.

That he has endured all these onslaughts and still come out of all the situations spiritually unscathed is the stuff of legends.

He has been defiant and he has always managed to plot and scheme his way back.

At independence, he suffered a series of Parliamentary defeats until the political gods smiled at him when he was voted senator for Mberengwa in the hotly disputed 2005 senatorial elections.

He then earned himself some ministerial appointments, first becoming minister of economic development before he was moved to the ministry of agriculture in 2007, in a Cabinet reshuffle in February of that year.

He lost his Cabinet position two years later in 2009 after having lost ZANU-PF primary elections for the 2008 general polls.

He, however, was appointed ZANU-PF national secretary for information and publicity at the ruling party’s congress held in December 2009.

He would lose that again five years later in 2014 after being accused of fanning factionalism by openly calling for the retirement of President Mugabe before the party’s December 2014 congress.

He was also accused of being part of a cabal that had plotted to assassinate the President.

The cabal was alleged to have been led by Mujuru, who was at the time the second most powerful person in the country being ZANU-PF’s second secretary and the country’s first vice president.

Gumbo became the first high profile member of ZANU-PF to be kicked out of the party.

Never short of amusement, Gumbo made one of the most memorable political quotes in recent years as soon as he was expelled.

“Now I will be watching from the terraces and see what will happen,” he said.

Mutsvangwa, who had made himself chief aggressor, retorted that since the days of the liberation war, Gumbo had always been a “touch and go” guy who did not really contribute much to the liberation of the country.

Events of last week could, in a way, prove Mutsvangwa’s assertion.

This time, Gumbo was expelled from the very party he founded, by the very person he sacrificed his all while still in ZANU-PF.

On firing him, Mujuru accused Gumbo of being the heartbeat of a clique that sought to dethrone her from the helm of ZPF.

This is a popular script now in Zimbabwean politics.

And now, he is back again on the terraces, or maybe not.

Gumbo and his group, which includes former fellow founding fathers Didymus Mutasa and Kudakwashe Bhasikiti, have hit back at Mujuru and said they do not recognise her decisions.

Interesting times are, indeed, in the offing.

In the wake of the his latest predicament, the Financial Gazette sought out distinguished war veteran, Crispen Mataire, better known by his nom de guerre, David Todhlana, to understand what kind of a man Gumbo is.

Mataire was one of the Zimbabwe People’s Army (ZIPA) commanders who clashed with younger and more ambitious fighters under the command of Josiah Tongogara and also clashed with the new ZANU leadership in 1977.

Gumbo and his group would be transferred to the same prison that housed ZIPA commanders in 1979.

Mataire surprisingly says Gumbo is not as divisive a character as he has appeared during his entire political career.

It is his brand of politics, he says, which is not compatible with the politics in Africa.

“We shared prison with him when they were transferred to Balama in June 1979. He is a very good man who cannot harm anyone, only that he is naturally bound to clash with those in power because he is someone who is outspoken and does not hesitate to speak his mind out regardless of whom it offends,” Mataire said.

“His arrest in 1976 was merely out of the fact that he had disagreed with both Tongogara and Mugabe who thought he was a threat to their power. Rex was also fighting Gumbo. This must also be the case now with Joice (Mujuru). But as far as I know him, he is a proper freedom fighter, who is not power hungry,” he added.

Mataire’s assertions could be true given Gumbo’s unwavering stubbornness.

When Gumbo takes a position, he will stand by that position.

This kind of stubbornness gives him the courage to take on anyone, no matter his situation.

It was evident in 1979 when he wrote a stinging treatise from prison about “The raging ZANU crisis and the emerging two-line struggle”.

It was evident in 2014 when, despite clearly facing the chop, Gumbo emerged, as ZANU-PF spokesperson, from a Politburo meeting — where his faction had taken serious battering, to tell the press a completely different story.

He would even spice it up with issues that had never taken place in the Politburo meeting. Financial Gazette