The South African lawyer who led the prosecution of Oscar Pistorius has quit to join a lobby group, accusing the state office of selective prosecution. 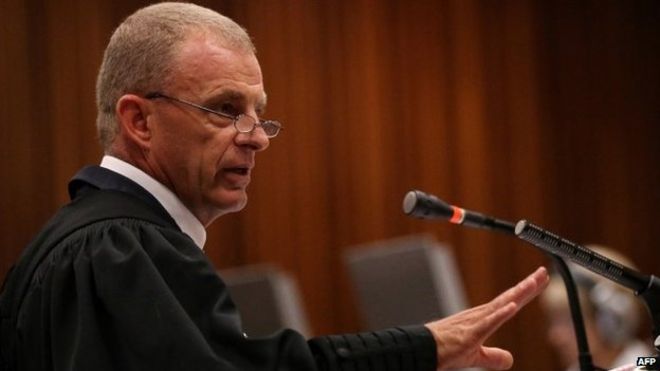 Gerrie Nel has joined AfriForum, a group fighting private prosecution that also aims to protect the rights of white Afrikaners.

He will head the group’s new private prosecuting unit, which will target state officials and politicians accused of corruption.

Mr Nel is nicknamed the Pitbull.

He was widely praised for his aggressive, calculated and relentless prosecutorial style during the trial of Pistorius, who is serving a six-year prison term for murdering his girlfriend Reeva Steenkamp in 2013.

Mr Nel accused the National Prosecuting Authority (NPA) of not treating everyone equally and says his new role would allow him to “help ensure that everyone, irrespective of position, is equal before the law”, a statement on AfriForum’s website says.

In October last year, the NPA dropped fraud charges against South Africa’s Finance Minister Pravin Gordhan, in what was seen as politically-motivated allegations, leading to questions about its independence.

Mr Nel will take up cases which the NPA has decided not to prosecute.

Kallie Kriel, CEO of AfriForum, says Mr Nel’s appointment sends a message to corrupt politicians and officials on national, provincial and local government levels that they can not be safe from prosecution due to their political contacts.

His first assignment will be an investigation to determine which public officials are not being prosecuted despite a strong case against them, the statement says. BBC News