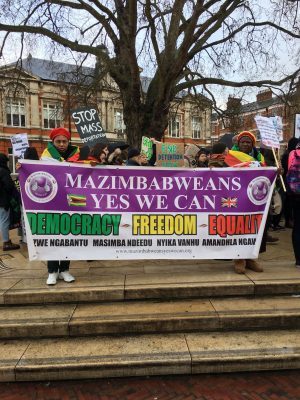 The Zimbabwean community who participated in lobbying the Kenyan Airways, joining in demonstrating at the Kenyan High Commission, in Central London on Monday 09/01/17, against Kenyan Airways participation in deportation and went on to join the high profile march in Brixton on Saturday 14/01/17, organised by the Movement For Justice (MFJ) against mass deportations felt relieved when one of their members could not be deported on Kenyan Airways, flight KQ101 at 17:30 hours.

MaZimbabweans Yes We Can (MZYWCAN)  together with the MFJ expressed their shock and were gutted when news filtered at the march that one of their members NM aged 55 years diabetic asylum seeker had been manhandled by 5 heavily built security agents from a private firm. NM was handcuffed and bundled into an awaiting secure van around 10:00 am.

She was taken to Heathrow, Terminal 4 for a 17:30 hours Kenyan flight KQ101, bound for Harare, Zimbabwe via Nairobi, Kenya.

It defies logic that a diabetic patient is picked at 10:00 am, by 5 men to head for Heathrow in an hour’s journey from the notorious detention centre for a 17:30 flight who’s boarding is only 2 hours before flight.

That meant that from the time she was hand-cuffed before 10:00 am the hand-cuffs were only removed at 17:00 hours when Kenyan Airways refused to fly her due to different pressures.

When I spoke to her  when she was still at Heathrow airport in the secure van with her security details. NM was emotionally tearful and very thankful to God, to all those who phoned and are participating in protests against deportations.

It is against this background  of heavy-handedness by these private companies which the Zimbabwean Diaspora Movements like MZYWCAN, Zimbabwe Human Rights Organisations (ZHRO), Restoration Of Human Rights (ROHR) are contemplating legal action against this unlawful treatment of their Zimbabwean counterparts and rampant violations of human rights.

Such treatment of deportees bring into mind what was reported by The Guardian, 14/10/2010, when an Angolan Jimmy Mubenga developed asphyxia after being heavily restrained by guards from G4S, a private security company.

Mr Mubenga had complained of breathing problems and despite verbalising, “l can’t breathe, l can’t breathe,” the guards continued pressing him down. It’s not known whether they were trying to put him in prone position or supine position bearing in mind the seats.

Both positions are unachievable. The British Airways (BA77), bound for Luanda, Angola was on the Heathrow runway when Mr Mubenga lost consciousness and the flight was cancelled forthwith while he was taken to hospital but was unfortunately pronounced dead. No amount of shillings or compensation will bring back human life.

The MFJ and the Zimbabwean Diaspora movements are challenging the private companies to respect the rights of asylum seekers of any nationality and not to have a repeat of the unfortunate fate of Jimmy Mubenga.

It’s a pity that Kenyan government through its airline is colluding in deporting fellow Zimbabweans to well known consequences such as torture, persecution, abductions, beatings, gang raping by Mugabes regime’s security agents, such as the youth brigade (the green bombers), Central Intelligence Organisations (CIOs), inter alia.

How can Kenyan Airways regardless of being in business sacrifice human life for a paltry £250 one way ticket, yet they are part of the African Union? Where is ubuntu/ humanity , or untu in Swahili here?

The Home Office should resend their fact finding mission and come up with a new Zimbabwean country guidance because the 2009 and 2013 ones are outdated and are never going to address the Zimbabwean situation which has continuously deteriorated for the past 37 years. Zimbabwe remains the most unsafe and least secure place especially for those who show that they do not support the Mugabe regime.

The diaspora who have embraced the openness in their host countries and demonstrate against the Mugabe regime are the worst culprits who risk being nabbed at the airport as they are handed over to the Zimbabwean security details.

The case of the Darfur deportee in Sudan comes into mind who was murdered in front of his family after being deported as a failed asylum seeker.

The Conservative government should not abrogate on its values of being a signatory of The Universal Declaration of Human Rights (1951) by clandestinely using Brexit to victimise immigrants. It is common sense that Brexit was for Great Britain to move out of Europe not to deport people. They appear to be misinterpreting Brexit.

As Emiliano Zapata said, “lf there is no justice for the people, let there be no peace for the government” to any government.