For years, the government has denied rumours of a return of the Zimbabwe dollar, a currency which became worthless in the face of 10 years of run-away inflation. But, despite these denials, the central bank has announced the launch of a surrogate currency branded as “bond notes.” 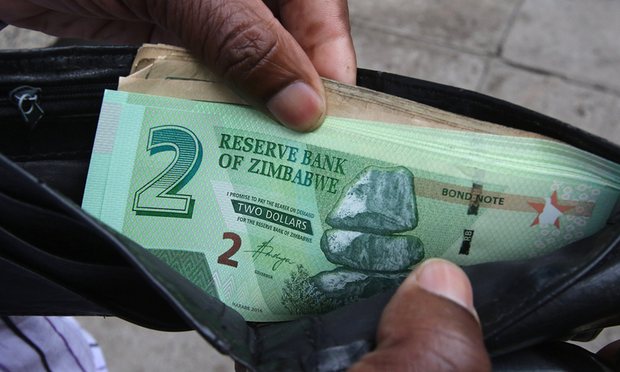 The bond notes, like their minted siblings – bond coins – will have the same value as the greenback. But only in the mind of Finance Minister, Patrick Chinamasa. The launch of the surrogate currency has been repeatedly postponed, following mass civil protests and glitches in production. The objection to government’s planned introduction of bond notes was top of the agenda for civic pressure groups, Tajamuka and This Flag, since May 2016.

At one point the bond notes were said to be under production in Germany, until reports surfaced saying the RBZ had failed to pay the printing company. Zimbabweans, who always manage to find humour in the grimmest situations, light-heartedly speculated that the bank note manufacturer had pulled the plug on the project after RBZ had offered to settle its bill in – wait for it – bond notes!

Let’s call a spade a spade

In its official statement, the RBZ says bond notes are an “export incentive”. It is however not very clear why this export incentive should be foisted upon the general public who have nothing to do with exports. The RBZ’s “export incentive” spin also begs the question; if exporters earn the country valuable foreign currency, why insult them with worthless paper that cannot pay for the imports necessary to feed the export-generating machinery?

In a bygone era, the export incentive was, quite logically, permission for exporters to retain a portion of their receipts in forex accounts. Issuing such a valueless incentive to the endangered species that is our exporter, is no different from a huntsman who, after a successful kill, rewards his meat-eating dogs with a bowl of dry leaves. If the RBZ’s “export incentive” was genuine, perhaps a less derisory motivation – such as tax rebates, discounted trading licenses – could have been offered.

Zimbabwe continually haemorrhages foreign currency for two main reasons: corruption and low productivity. The RBZ claims that its motive is to stem the externalisation of foreign currency, but makes no effort to reawaken the comatose local industry. Several of the people in government are looking to secure their future, in a post Mugabe Zimbabwe.

This is the only plausible reason for the monies that are stashed overseas. Because of low productivity, all the forex collected at supermarket till points invariably finds its way to South Africa, where the majority of FMCGs are purchased. Government has done nothing to intervene in corruption and import reliance. The recent import controls do not qualify as sensible intervention, as long as nothing is done to revive local production. Import bans can only be feasible once industry has been recapitalised and manpower is trained.

If one hundred dollars in bond notes is not acceptable to buy even a matchbox outside of Zimbabwe, then we should call it by its true name – Zimbabwe dollar. Whatever clever terminology Dr Mangudya concocts – surrogate currency, bond notes, export incentive – is meaningless. If it smells like the Zim dollar, is worthless like the Zim dollar, then it is a Zim dollar.

Signs of trouble ahead

The one inescapable lesson that history offers is that history repeats itself. The RBZ has printed worthless money before, under the same conditions of low productivity, nonexistent accountability in government and zero trust between the public and the financial system. The last time RBZ went on a printing spree, we had the same leadership, which cannot even account for mining revenue and a public service that is clueless about the number of employees on its payroll. Logic states that you get the same result if you keep doing things the same way.

Already, some products have disappeared from supermarket shelves. The most popular brand of margarine, which was under $3 at the beginning of the year, is now only available on the black market at the extortionist price of $5 – if at all you can find it. Service stations are already running out of fuel. Before the RBZ had launched its bond notes, the currency has already surfaced at informal money changers. Even a man with amnesia will remember that bond notes have the yucky taste and aroma of Zimbabwe 2007.

Why bond notes will flop

Since July, Zimbabwe has been engulfed in the flames of protest – literally. Several cities have choked in the tear gas of a police-civilian war. The people have rejected bond notes. But as always, Robert Mugabe’s government will rape its way to fulfilling its intentions. What else can you expect from a leadership whose roots sprouted from violence.

Zimbabweans have shown a resistance to even the most obvious solution to the cash crisis – plastic money. While there has been an increase in the uptake of point of sale systems and mobile money transfers, the informal sector continues to operate in its own universe where tattered American dollars are the only acceptable form of payment. In order for a merchant to accept electronic payments, a bank account is essential. To expect the sceptical informal sector to trust the banking system after the experiences of 2000-2008 is wishful thinking.

The informal sector’s paranoia is not without justification. Lately we have seen fuel shortages return. It has also not escaped the public’s notice that more and more newly minted bond coins are appearing in the system, while fewer and fewer greenbacks are in circulation. Where is the US dollar going to and where are these shiny bond coins suddenly coming from, if the RBZ has repeatedly assured the nation that it is has only minted a limited supply?  Governor Mangudya claims that only $10M worth of bond notes will enter the money supply this week. But bankers have braced themselves for “truckloads of money,” suggesting oversupply.

Even if the citizens eventually capitulate, there can only be one outcome: economic cardiac arrest. Government will keep draining the system of American dollars, in order to fund both state and ruling party projects – especially as we head to 2018 polls. The RBZ will print more bond notes – Zim dollars, by their proper name – because Mugabe has already indicated that he will not tolerate dissent from those he appoints to control the national purse. Ask Patrick Chinamasa’s “bookish” predecessors, who were sacked for failure to improvise as the boss demanded. In the end, Zimbabwe – an import dependent nation – will run out of basic goods. That is the point at which the bond note argument will be finally settled.

My pen is capped.

Toby Sithole: Zimbabweans must desist from negativity before it spreads like a…

Honeymoon over for 1 000 convicts