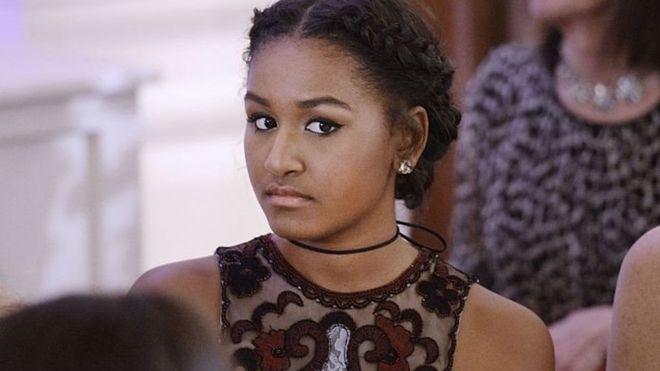 President Barack Obama has disclosed that his youngest daughter recently mocked him on Snapchat.

The US leader said Sasha had recorded him discussing the social network at a family dinner and then quietly posted a reaction to her friends.

It is not the first time the president has discussed his 15-year-old’s online activities.

In July, he said she also tweets, leading several media outlets to try to identify her account.

Likewise a copy of the described Snapchat post has not been made public. Messages posted to the app are designed to disappear after being viewed or within a short period of time, but there are ways to circumvent the restrictions.

“Sasha gave me instructions on Snapchat,” he said.

“One night at dinner we’re sitting there, and I had read that Snapchat was becoming really popular among her age cohort. So, I said: ‘So, tell me about Snapchat.’

“So, she starts explaining stuff – you can make little faces on your picture, and this and that and the other.

“And at the end of it, Michelle and I are sitting there. And I said: ‘Isn’t this interesting?’

“And I started talking to Michelle about the implications of social media and what all this means.

“[And I] come to find out she was recording us the whole time, and then sent to her friends afterwards: ‘This is my dad lecturing us on the meaning of social media.’

“And she took a picture of herself sort of looking bored.”

The president added that his wife – who joined Snapchat in June – and his eldest daughter Malia had “loved” the post.

The show’s host, Jimmy Kimmel, joked that the event represented a security breach.

The president also mentioned that his own iPhone was limited to receiving emails and browsing the internet, and would not take photos, play music or make calls.

“My rule has been throughout my presidency, that I assume that someday, some time, somebody will read this email,” he said.

“So, I don’t send any email that at some point won’t be on the front page of the newspapers.”

Hillary Clinton – who is campaigning to be the next commander-in-chief – has been beset by a scandal over leaked emails, while her rival Donald Trump has been accused of using outdated software on his company’s email servers.

President Obama also said that he expected technology to preoccupy his successor.

“One of the biggest challenges… is going to be: how do we continue to get all the benefits of being in cyberspace but protect our finances, protect our privacy?

“How do we balance issues of security? Because people expect the government to monitor this enough to protect them from bad guys.

“But they worry that if government is in there too much, then who is going to protect them from government?

“This is going to be a big debate that we’re going to have for a long time.” BBC News