A woman in Bijnor, Uttar Pradesh has been arrested on charges of attempt to murder after a shocking video, uploaded by a social activist went viral on Monday, which showed her brutally beating up and torturing her elderly mother-in-law. 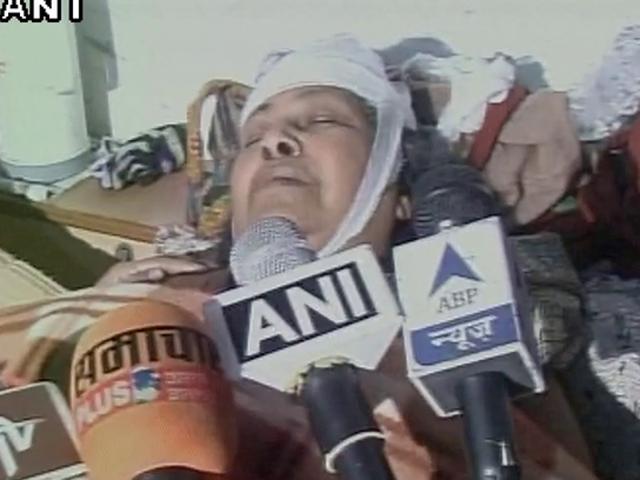 The video was uploaded by social activist Kundan Srivastava on his Facebook page and was supported by an appeal to Chief Minister Akhilesh Yadav to take action against the woman named Sangeeta Jain.

The video, captured on January 5, shows Sangeeta brutally assaulting 70-year-old Rajrani Jain, with a brick and trying to strangle her with a rope.

Watch Woman brutally assaults mother-in-lawThe footage, just over a minute long, shows Sangeeta first beating her sick and helpless 70-year-old mother-in-law with bare hands and then with a brick on her head, repeatedly. She then used a cloth to make a noose around her neck in an attempt to kill her.She even tries to pull the old woman down from her bed.

The police,have registered a case under section 307 of the Indian Penal Code against Sangeeta, Subhash Singh Baghel,SP told ANI.

Sangeeta’s husband Sandip Kumar Jain installed a CTV camera in their home to catch her red-handed as she had been assaulting his parents for quite some time.
”This has been happening for quite some time now. She used to assault and abuse my parents very often. I complained about her but no one used to listen to me. Then after waiting for two years, I installed a CCTV camera expecting that she will fix her ways, but she didn’t.

How to handle an interfering mother-in-law

That day she crossed all the limits. I installed the camera to unmask her since the law is on the woman’s side when these types of cases are concerned,” said Sandip.
Recalling the incident, the victim said that her daughter-in-law attacked her mercilessly. “My daughter in law attacked me, she slapped me again and again. She hit with me a hard stone,” she is quoted as saying by ANI.

Sangeeta and her husband Sandeep Jain have been married for 7 years and a divorce case is going on, CNN IBN reported. Sangeeta also allegedly filed a false report against her husband.   HindustanTimes

Zimbabwean musicians stranded in the UK… as promoter bolts

Kereke in court over rape

How to handle an interfering mother-in-law