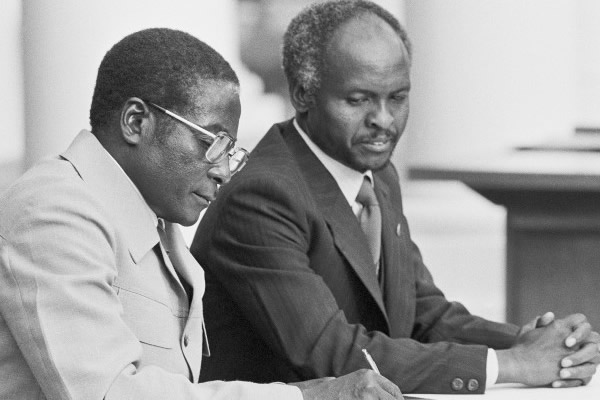 UK based Zimbabwean music producer DJ Taps has just done a music remix of President Robert Mugabe launching an attack on the gay community following the death of the former ceremonial President of Zimbabwe Canaan Banana.

Banana was buried without the full honours that are traditionally accorded to former heads of state. The Zanu PF Politburo’s Secretary for Information and Publicity at the time, Nathan Shamuyarira, told state radio that “they (the politburo) could not accord Banana hero status as a matter of principle.”

Banana, was arrested in 1997 on charges of sodomy following revelations made in the murder trial of former bodyguard, Jefta Dube who had shot dead a fellow police constable who taunted him as “Banana’s wife’.

The trial exposed how Banana coerced numerous men in his service as President, ranging from domestic staff to security guards, into accepting sexual advances. His preferred method of seduction was to dance to Dolly Parton records, while wearing a belt of bullets across his chest.

Banana even targeted members of some of the sports teams for whom he had acted as referee during matches. When Dube complained to the deputy police commissioner, he was told that nothing could be done. When he asked Banana to stop, Banana refused, telling him: “I am the final court of appeal.”

The case also embarrassed President Mugabe because it became clear he knew about the sodomy allegations but did nothing about them. Banana dismissed all the allegations against him as “a mortuary of pathological lies and a malicious vendetta of vilification and character assassination.”

Listen to the Remix