Was the referee right to add time to DeMbare, Bosso match?

HIGHLANDERS cried foul at Rufaro on Sunday and their mourning, that they had been victims of a gross violation of Fair Play in their latest showdown against bitter rivals Dynamos, could be heard as far away as Bulawayo. 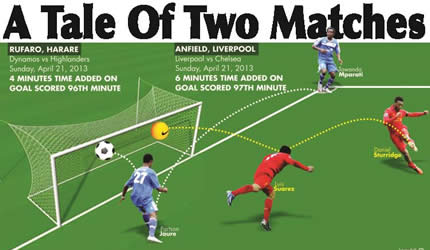 Bosso were minutes, if not seconds, away from a famous victory over their eternal rivals, in the Glamour Boys’ backyard for good measure, which would have been their first such league success story in seven years.

But amid the clowning of Mthulisi Maphosa and the delirium that characterised the bay housing the Bosso fans on the City End, disaster struck in cruel fashion when defender Partson Jaure turned home a last-gasp goal for the home side.

It helped DeMbare preserve their record as the only team yet to lose a match in the Castle Lager Premiership race this season although the Glamour Boys — for a team of their pedigree — are swimming in rough seas as they are yet to win in five starts for the first time since the turn of the millennium.

Bosso players felt that Dynamos had been given a lifeline after referee Matemera extended the life of the game beyond the four minutes of time added on that he had instructed his fourth assistant referee to show on his board.

Maphosa, who somehow had chosen to showboat during such a big match rather than play the leadership role of preserving his team’s lead, led the charge on the referee after the match.

A number of Highlanders players, notably goalkeeper Munyaradzi Diya, outstanding during the tie against his old club, and substitute Milton Ncube joined in the melee. Diya wept uncontrollably afterwards and had to be comforted by his fellow Bosso ’keeper’ Arial Sibanda.

To his credit, Bosso coach Kevin Kaindu battled to restore order among his heartbroken players, who really felt they had done just enough to win this big game.  But are Bosso justified to accuse referee Matemera of robbing them a priceless league victory over DeMbare in the Battle of Zimbabwe at Rufaro on Sunday?

Yesterday, the Zifa Referees Committee came out in full support of Matemera and said the referee was right in taking account of the time lost, during time added on, and there was nothing wrong in the six minutes that finally helped DeMbare steal their equaliser.

One of the big talking points was when Bosso captain Innocent Mapuranga went down inside the box and play had to be stopped, within that period of time added on, and Matemera, on arrival on the scene, raised his arm to indicate that he had stopped his watch.

Zifa Referees’ Committee secretary-general Tendai Bwanya said there was need for players, coaches, fans and the media to understand the laws governing football, especially in relation to time that can be added on, so that they won’t react in a wrong way when the right decisions are made.

Bwanya said Law 7 was key in this debate:

“LAW 7 — DURATION OF THE MATCH (Allowance for time lost)

Allowance is made in either period for all time lost through:

Assessment of injury to players

Removal of injured players from the field of play for treatment

Any other cause The allowance for time lost is “AT THE DISCRETION OF THE REFEREE.”

Further clarification is given on Interpretation of the Laws of the Game and Guidelines for Referees:

Allowance for the time lost

Many stoppages in play are entirely natural (for example, throw-ins, goal kicks). An allowance is to be made only when these delays are excessive.

The fourth official indicates the MINIMUM ADDITIONAL TIME decided by the referee at the end of the final minute of each period of play.

The announcement of the additional time does not indicate the exact amount of the time left in the match. The time may be increased if the referee considers it appropriate but never reduced.

The referee must not compensate for a timekeeping error during the first half by increasing or reducing the length of the second half.

While the latest debate has revolved around accusations that the referee Matemera extended the match beyond the four minutes that he advised his fourth official to indicate to the players, coaches and the fans, it hasn’t taken into context that, according to the laws governing the game, the four minutes were the MINIMUM ADDITIONAL TIME that could be added.

What this means was that the game could not end before the four minutes into time added on had been played but, at the discretion of the referee, who would take into account time lost within that period too, by the team that was in defensive mode, the match could be extended beyond the four minutes.

Matemera decided on Sunday that there was justifiable reasons to extend the game beyond the four minutes of time added on that he had indicated to make up for the losses that came during that optional time, and DeMbare took full advantage and struck home their priceless equaliser.

Bwanya said it was important that everyone involved during the match should help by not wasting time.

“Referee Norman Matemera was dead right in taking account of the playing time lost. When the Highlanders players were injured the match was not being played hence the stopwatch was stopped to take account of the time,” said Bwanya.

“This would also minimise the time lost.”

Diya felt Matemera extended a lifeline to Dynamos that the Glamour Boys barely deserved on Sunday.

“It’s unfortunate that we failed to collect maximum points after we had done everything,” said Diya.

Radio personality Mike Madoda, a strong Bosso fan who hosts a daily evening sports programme on Power FM, which is backed by sponsors, was so upset after the match that he was swearing at the match officials, accusing them of bias and incompetence, as he left Rufaro on Sunday.

Dressed in an Orlando Pirates’ black-and-white home jersey strip, the ones that are popular with Bosso fans, Madoda just had climbed down the steps from where he was watching the match, on the bay adjacent the VIP Enclosure, when he exploded into a furious rage against the match officials.

A number of VIP guests appeared stunned as Madoda tore into the referees and while they probably understood his fury, given his love for Bosso, they were surprised that a man who is supposed to be an impartial commentator, by virtue of his privileged position as a host of a sports programme on national radio, should spin into such anger and swear in public.

In sharp contrast, former Bosso chairman, Ernest “Mapepa” Sibanda said even in that extended time, his team should have preserved their lead if they had kept the same focus, and discipline, they had demonstrated in the first 85 minutes of the match. The Herald

Learnmore Judah Jongwe: An Ode to an Unfulfilled Dream