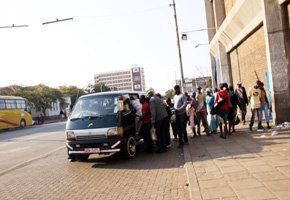 HARARE – A 37-year-old kombi driver, who had not gone for a retest and medical examinations, was last week slapped with an effective two year jail term.

Bernard Gochera was also prohibited driving class 2 vehicles for life while he was banned from driving class 4 vehicles for six years. Harare magistrate Arnold Maburo also slapped him with a US$300 fine or he risked a further 90 days in prison.

The State, led by prosecutor Barra Ndoro proved that on March 1 around 8:30 pm, Bernard was driving a kombi with 18 passengers along Inez Terrace near Robson Manyika Avenue when a member of the public reported him to the police for being drunk while driving a public service vehicle.

While Bernard was arrested, he was then subjected to a breath test and it was discovered that the amount of alcohol in his system was 250 milligrams.

Meanwhile, a 21-year-old man who ran over a pedestrian in the Harare city centre before dragging her unconscious body under his car also appeared in the same court last week.

Brighton Chikanga is being charged with culpable homicide, attempted murder, not stopping after having an accident and driving without a driver’s licence. The court remanded Brighton in custody to March 11 for trial.

It is said that on January 18 this year, Brighton had his kombi parked along Rezende Street facing South when he saw three police officers approaching his vehicle armed with batons.

The State led prosecutor Ndoro alleges that Brighton started reversing at high speed without due care and he hit Rungamirai Ganye and she was dragged while underneath the vehicle.

Reports are that Brighton did not attempt to stop his kombi but continued reversing before leaving Rungamirai for dead in the street. It is said that several pedestrians tried shouting at him and others even threw stones at his car to try and draw his attention but all efforts were in vain as he did not stop.

After Rungamirai had been dragged for a distance, Brighton reportedly drove off headed towards Seke Road. The female victim was taken to Parirenyatwa hospital where she died an hour later, from a ruptured liver and spleen, shock and abdominal trauma caused by the dragging.

Why spend so much on a non-event?