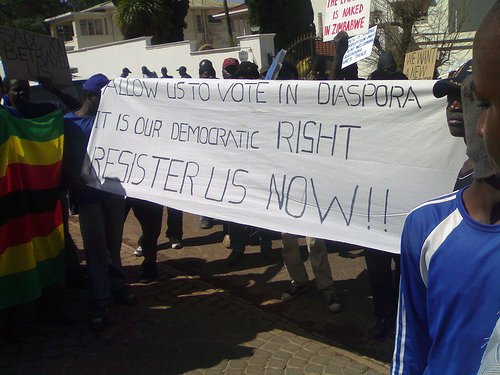 HARARE – Zimbabweans in the Diaspora must be given voting rights in the forthcoming referendum and watershed elections, the African Commission on Human and Peoples’ Rights (ACHPR) has ruled.

The ACHPR has directed the government to allow Zimbabweans living abroad to vote in the March 16 referendum and the general elections that will follow, irrespective of whether or not they are in the service of the government.

Zimbabwe has in the past ignored such rulings.

#HowTheyRobbedUs, just another pity party for the cream of…

Approximately four million Zimbabweans live in the Diaspora, according to a 2009 country profile report by International Organisation for Migration (IOM).

In passing its provisional measures, the ACHPR said by denying the Diaspora the right to vote, Zimbabwe was in a “prima facie violation of the African Charter,” read the verdict from the just ended 7-day 13th extraordinary session which was held in Banjul, The Gambian capital.

The South Africa-based litigants were represented by the Zimbabwe Lawyers for Human Rights in the suit filed in the ACHPR, which is the premier human rights enforcement mechanism of the African Charter on Human and Peoples’ Rights.

The Zimbabweans had approached the court saying they have been disenfranchised and were seeking participation in the referendum using the postal vote system.

Being a party to the African Charter, Zimbabwe is bound by the ACHPR’s decisions although the organ lacks the force to implement its decisions, a situation exploited by countries such as Zimbabwe to disregard rulings.

Hundreds of thousands of people were uprooted at the height of Zimbabwe’s political and economic crisis, the majority fleeing to neighbouring countries. Many have not yet returned home.

The ACHPR ruling comes as Defence minister and Zanu PF legal affairs secretary Emmerson Mnangagwa has thrown down the gauntlet and declared that the Diaspora will not vote as long as Western sanctions on Zimbabwe are not lifted.

Mnangagwa told a belated celebration organised by Zanu PF legislator Kizito Chivamba in Chiwundura last year that Zanu PF will not allow the Diaspora to vote. “They (MDC formations) want those in the Diaspora to vote simply because they are able to go out there and address them,” Mnangagwa said.

“We have been barred from visiting those countries and how do they expect us to do the same? Sanctions must go first and if they don’t, I don’t think those in the Diaspora can also vote until they return home. For the ground to be level, we are saying the illegal sanctions must go.”

Prime Minister Morgan Tsvangirai’s MDC party has said Zanu PF and Mnangagwa must know that the issue of “restrictive measures” and the Diaspora vote are not linked in anyway and therefore cannot be compared.

The Reserve Bank of Zimbabwe in a recent monetary policy review stated that remittances from the Diaspora had reached approximately $138 million through official channels. Daily News

ZESA in court, owes US$19 million in salaries

#HowTheyRobbedUs, just another pity party for the cream of Zimbabwe