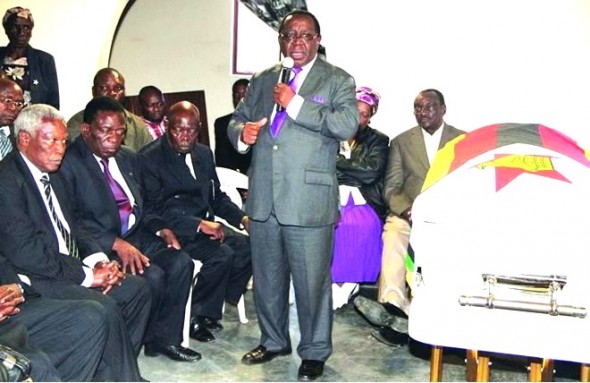 HARARE – Zanu PF national chairperson Simon Khaya-Moyo has agreed to give his ex-wife, whom he accused of cheating, a huge payout which includes a farm. The divorce was finalised yesterday before High Court judge Ben Hlatshwayo.

Moyo, a man of modest means going by the assets listed in court papers, sensationally claimed in the divorce trial that his wife of over 30 years was bedding another man.

Moyo is a former Cabinet minister and diplomat. As party national chairperson, he sits in the presidium and is the fourth most powerful official in Zanu PF.

The Chisipite house was given to the duo’s eldest son Khanyisa, while the Bulawayo home was handed to their second son Mandlenkosi.

“It is agreed that the offer letter and lease agreement in the plaintiff’s name (Simon), and all other rights accruing there from, in respect of the agricultural land known as Edenvale Farm, Mangwe district, Matabeleland South be ceded to the defendant (Sibonokhuhle) and the parties’ two children,” reads part of the consent order.

Sibonokhuhle was made the sole owner of the “farm equipment, tools and implements, all livestock, crops and other farm produce”.

She also got all the furniture and other household effects.

Sibonokhuhle walked away with a Toyota Hilux and a Nissan motor vehicle and $27 500 in maintenance arrears, to be paid within 30 days.

The divorce case opened at the High Court on August 23 last year, with Moyo saying the marriage had failed to live up to expectation that he was no longer enjoying sexual intimacy with the wife.

The couple were married under the Marriages Act on August 30, 1980 at Bulawayo Magistrates’ Courts.

However, it is the revelation of adultery that appears to have hurt Moyo the most.

“The defendant (Sibonokhuhle) has committed infidelity with another man,” Khaya Moyo reveals in court papers.

Moyo was represented by Wilson Tatenda Manase and Wellington Thomas Pasipanodya, while Beatrice Mtetwa appeared on behalf of Sibonokhuhle.

Moyo joins the band wagon of other top Zanu PF officials, who were forced to fork out a hefty divorce settlement.

Environment minister Francis Nhema, was forced to pay off his wife of 20 years, Louise Sehlule Nhema nee Nkomo, while Sylvester Nguni, minister of State in the office of Vice President Joice Mujuru’s office and former diplomat to the United Nations Boniface Chidyausiku had their divorces concluded in the High Court recently.

But leading the pack was Local Government, Urban and Rural Development minister, Ignatius Chombo’s divorce, which saw the biggest settlement with his wife Marian Mhloyi in August last year.

The divorce case exposed the wealthy minister’s wide array of assets, with his ex-wife walking away with several vehicles, houses and various properties. Daily News